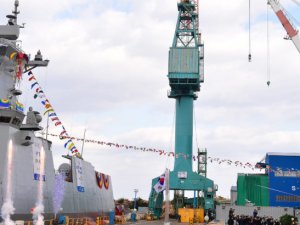 A total of 8 frigates of this class, also known as the Incheon-class batch II or FFG-II , are set to be built by both DSME and Hyundai Heavy Industries, for the South Korean fleet.

The frigates are an improved version of the Incheon-class (FFX batch I). FFX Batch II frigates displace 2,800 tons, are 122 meters long, 14 meters wide and 34 meters high. They can accommodate a maritime helicopter.

Powered by four MTU 12V 4000 M53B diesel engine and one Rolls-Royce MT30 gas turbines in a Combined diesel-electric and gas (CODLAG) arrangement, the frigate features a hybrid propulsion system to reduce underwater radiated noise. The class is capable of reaching speeds of 30 knots, according to DAPA.

ROKS Seoul is set to be commissioned with the ROK Navy in early 2021. A program to build the third batch (FFX III) frigates which will displace 3,000 tons and feature a phased array radar is also underway.