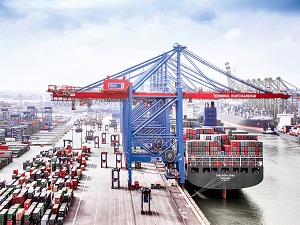 Hamburger Hafen und Logistik AG (HHLA) has announced that its profits after tax increased by 6.1% in the first nine months of 2018 compared to the same period in 2017.

The growth was largely driven by its Port Logistics sub-group, the revenue from which rose by 2.2% from 12 months earlier to just over USD $1 billion between January and September. Growth in that area came about largely thanks to an increase in container throughput, which rose by 1% to 5.5 million TEU, which the company credited to a strong showing in its Far East terminals.

Overall, the company’s earnings before interest and taxes rose by 0.6% from 2017, despite its revenue shrinking by 0.7%. The results are strong enough for HHLA to reaffirm its optimistic outlook for the rest of the fiscal year, which include aiming for matching its revenue and container throughput from 2017.

Speaking about the results, Angela Titzrath, Chairwoman of HHLA’s Executive board, said: “HHLA remains on its successful course in the current financial year. “We will safely reach the targets set for 2018, despite an ever-changing market environment. We are further strengthening our core business through investments so that we can meet the future needs of our customers.

“Equally important is our search for new, digital business fields. Our overarching objective is to help our customers to transport their goods and commodities safely, quickly and efficiently from A to B – also in the future. “In doing so, HHLA aims to be the gateway to the future.”