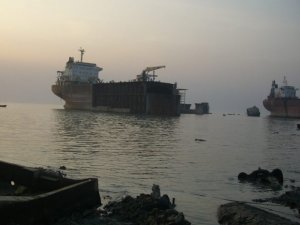 UK law firm Watson Farley and Williams (WFW) has warned shipping lines that the high court ruling that Maran UK had a duty of care for shipyard worker Khalil Mollah who fell to his death while working on the oil tanker 300,000dwt Ekta in 2018.

The implications of the ruling, passed on 13 July by Justice Jay, are twofold according WFW, companies with opaque ownership structures that attempt to avoid liability will not be protected in future. While, given the difficulties around what WFW call “containing liability” companies are at risk even after a vessel is sold for scrap.

According to a briefing note published by WFW, “The direction of travel towards safer environmental and health and safety practices in the maritime sector and more robust regulation of the same has been clear for some time.”

Oliver Holland, a partner at Leigh Day, the law firm that prosecuted the Maran UK case, given that it is an English court decision, the judgment will only apply directly to UK shipping companies, “although claimants in other jurisdictions may be able to rely on it as persuasive authority, particularly other European countries and common law jurisdictions.”

So while most shipping lines are outside of the UK court jurisdiction WFW went on to say, “The Court may not be piercing the corporate veil in these cases, but it is proving increasingly willing to push it to one side where there is evidence of serious harm to human health and the environment.”

Leigh Day’s view is that “It is certainly our impression of the industry – that shipping companies set themselves up in a way so that there is a web of companies that are interrelated under an umbrella group but based in multiple jurisdictions and often in tax havens where they can often avoid scrutiny.”

WFW also noted that the two maritime regulatory initiatives that deal with the recycling of ships, the EU Ship Recycling Regulation and the global standard, the Hong Kong Convention, neither of which had come into force at the time of the sale of the Maran UK vessel, and the HKC is still not in force, though there is an expectation that it will be by the end of this year.

“As these standards are measurable and internationally recognised, adherence to them will offer some protection from this sort of claim; it may be prudent for those involved in the sale of end of life vessels to make explicit reference to meeting these standards in the relevant transaction documents,” said WFW.

According to the London lawyers the case rested on three key elements, whether Maran UK, a part of the Angelicoussis Group of companies, had control of where the vessel was eventually scrapped. Whether companies who sell ships for scrap to Bangladesh would be liable to compensate workers who suffer injury or worse as a result. And finally how robust contractual clauses that stipulate demolition should take place “in an environmentally sound manner and in accordance with good health and safety working practices”.

WFW believe, “This decision is significant as it provides further confirmation that a shipowner’s liability may not end at the point of sale for scrapping.” And that means that any owner, that scraps a vessel could be liable, which means Justice Jay’s decision could “potentially have far-reaching implications for the shipping industry.”

Shipping companies across the world should beware as the decision handed down by Justice Jay reveals a increasing tendency for courts to hold companies operating in other jurisdictions liable.

“The vessel was owned and operated by companies within the Angelicoussis group via a webbed company structure,” Holland explained. However, he added, “It is possible to bring in a foreign defendant to a claim as a ‘necessary or proper party’ but the court’s permission to do so is required and there must be a UK defendant against which there is a valid claim. In theory though this could be a situation where a foreign defendant could be brought into this jurisdiction.”

The High Court’s judgement on 13 July shows that in the UK jurisdiction at least, “The Court’s finding is in line with an increasingly expansive attitude towards potential liability for operations in other jurisdictions that has been seen in various decisions including by the UK Supreme Court and the UK Court of Appeal,” said WFW, particularly in cases that have environmental, health and safety issues at their core.

This news is a total 1148 time has been read
Tags: Angelicoussis, GroupMaran , UKWatson , Farley and Williams