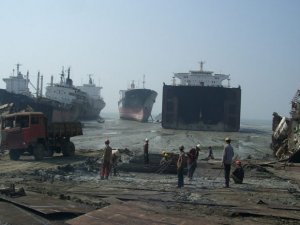 UK High Court judge Justice Jay today ruled that the shipowner owed a “duty of care” to a Bangladeshi worker killed in a ship-breaking yard accident in March 2018.

Oliver Holland a partner at Leigh Day told Container News that the ruling on 13 July, “had the potential to change the ship-breaking industry.” He added, “it will make sure that [all] owners think twice before sending ships to South Asia for breaking.”

Khalil Mollah fell to his death while working on the oil tanker 300,000dwt Ekta owned by Maran UK, a subsidiary of the Angelicoussis Shipping Group and the case was brought by Mollah’s widow Hamida Begum.

In what could prove to be a landmark ruling for the whole of the shipping industry and the way that it recycles vessels at the end of their useful life Justice Jay accepted that Maran UK had a duty of care, but also agreed that:

The judge added, “The proximate cause of the accident was the deceased’s fall from a height, but on a broader, purposive approach the accident resulted from a chain of events which led to the vessel being grounded at Chattogram [the Zuma Enterprise Shipyard in Chattogram].”

According to law firm, Leigh Day, the International Labour Organisation ranks shipbreaking at Chattogram as among the most dangerous jobs in the world. The area has been called “the world’s cheapest place to scrap ships”, and is notorious for its atrocious working conditions, prevalence of child labour, and the tragically high death and injury rates among its workers.

Holland added, “There has been a campaign for many years to halt the dangerous life-threatening practices of shipbreaking on the beaches of Bangladesh.

“If Maran (UK) Ltd is made to accept that it owed Mr Khalil Mollah a duty of care, maybe that will go some way to making  UK shipping companies think twice about accepting greater financial reward for their end-of-life vessels at the cost of the environment and the lives of South Asian workers.”