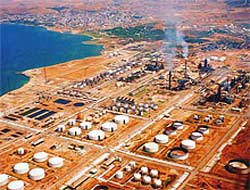 TransCentralAsia Petrochemical Holding Consortium submitted on Thursday the highest offer with 2.05 billion USD in the auction aiming to privatize 51 percent of PETKIM Company.

After the auction, executives of TransCentralAsia said that the Kazakh have the highest share in their consortium, but refrained from giving more details.

After the three eliminatory rounds, the auction was launched at 1.68 billion USD.

In the first three rounds of the auction, the highest bid was 1,825 million USD and Carmel-Limak consortium withdrew.

Zorlu Holding withdrew from the auction in the fifth round in which the highest offer was 1.9 billion USD.

The highest bid was 1,940 million USD in the sixth round, and Calik-IOCL withdrew in this round.

Thus, TransCentralAsia consortium was technically awarded with the tender.

After the Competition Board expresses its view about the outcome of the auction, the Tender Commission will present the result to the Supreme Board of Privatization (OYK).

If the OYK ratifies the outcome, a contract will be signed by the winner and 51 percent of Petkim shares will be transferred to the winning consortium. Thus the tender will be both technically and legally over.

This news is a total 644 time has been read