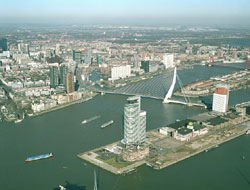 Gate terminal of Rotterdam has reached the highest point in the construction process of its terminal.

Gate terminal of Rotterdam has reached the highest point in the construction process of its terminal.

With the positioning of the roof on the third and last tank, Gate terminal has reached the highest point in the construction process of its terminal. Seven powerful booster fans blew the whole 670 ton roof slowly upwards to a height of approximately 40 meters. The roof, about 15 meters high, consists of a steel skeleton joined together by kilometres of welding. When the roof is placed at the top of the tank, the tank will be sealed all round.

In mid 2008 construction of the three tanks began in earnest. Each of them has a diameter of approximately 90 meters, which makes it almost as big as a football field. Each of the tanks can contain a maximum of 180.000 m3 net and can in total provide gas to almost seven million households in the Netherlands per annum.

Gate terminal, a joint venture of Gasunie and Vopak, is the first independent import terminal of liquefied natural gas in the Netherlands. Gate terminal is fully on track to start operations in the 2nd half of 2011. The current capacity of 12 billion m3 natural gas.

This news is a total 2827 time has been read