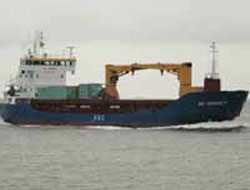 THE Amiya Scan, a vessel hijacked by Somalian pirates for 31 days, is now under the control of its crew and heading for a safe port.

THE Amiya Scan, a vessel hijacked by Somalian pirates for 31 days, is now under the control of its crew and heading for a safe port.

The vessel"s owner Reider Shipping has not released any further details about how the hijacking was brought to an end, but Lloyd"s List has been told that no other vessels were involved and the hijacking did not end violently.

All of the crew are safe and well and have enough food and drink onboard, a spokesman said. However, it is not yet certain how much fuel the vessel has as it had been running low.

It could be that a vessel needs to be sent to the Amiya Scan so it can refuel at sea, and it could be another week before the crew reach a safe port, the companies stated.

Families of the four Russian and five Philippine crew-members have all been notified. Once established which port the hijacked vessel will enter, a specialist team will be sent out to meet the crew, said the spokesman.

Lars Juhl, director of charterer Scan-Trans said: ?It was a difficult time but with professional backup we were able to remain calm and focused on the well being of our crew on board. Also, international diplomatic support, and restraint, contributed to the solution. We cannot stress enough how pleased we are with the release.?

The companies thanked and acknowledged ?the courage and strength shown by the master and crew members on board the Amiya Scan during their ordeal?.

The Captain of Amiya Scan had confirmed that he and the crew were ?treated reasonably well? by the hijackers.

When the vessel was hijacked on May 25, it was some 80 nm of the northern coast of Somalia, en route from Kenya to Romania.

Once captured it was taken down the east coast of Somalia and held offshore close to the town of Eyl.

In a joint statement the two said because of ?a growing number of attacks on merchant ships over the past two years and also an increase in the incidence of violent attacks, Reider Shipping and Scan-Trans believe it would be irresponsible to provide any details of the on-going dialogue with the hijackers over the course of this incident, or to release any details of the operational issues involved".

?Any such details provided in the public domain could, we believe, encourage would-be pirates and add further danger to the victims of such attacks.?

The companies also thanked ?the many parties, agencies and professionals involved for their efforts in achieving the release of the crew and vessel?.

This news is a total 1834 time has been read