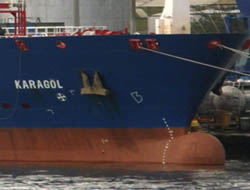 No help is received from NATO ships

Turkish Maritime Magazine Executive Editor Recep Canpolat had an interview by satellite phone with U?ur Mümtaz Temelta?, the captain of the ship KARAGÖL, that was hijacked off the shore Yemen.

The captain of the highjacked Turkish flagged ship said to receive no help despite the call for help from the battleships of NATO during the pirate attack.

U?ur Mümtaz Temelta?, the captain of the turkish flagged chemical tanker, which was attacked by pirates made special statements for Deniz News Agency.

The captain indicated to the Executive Editor of Turkish Maritime Magazine Recep Canpolat that they fought off the pirates for 45 minutes and that one of the boots of the pirates was capsized, but there were no help from NATO ships during this fight even though they called NATO for help.

The pirates attacked with heavy weapons

Declaring to be attacked by two boats departed from the main ship of the pirates, U?ur Mümtaz Temelta? explained the attack moment: ? We were attacked by the pirates, who were in heavy weapons loaded rubber boats, at 16.04 GMT+02:00 on Wednesday 12 November 2008 while we were under sail 16 miles offshore Yemen. First attack came to the left port-side. We made an emergency manoeuvre and blocked the climbing of the pirates. Having repulsed the first attack, the pirates reattacked. In the meantime one of the boats was capsized owing to our manoeuvre and the pirates fell down into the see. After the second boat gathered the fallen pirates, they mounted a third attack aiming to come on board the ship and to take control. Needless to say we were calling NATO battle ships for help while we were heartily striving to repulse the pirates. Unfortunately we could receive no answer for our call through VHF channel. If the NATO forces had helped us the while, we wouldn"t have been having this problem. NATO forces didn"t succor and after 45 minutes of struggle, the pirates climbed the ship. The pirates covered the living location with fire. The pirates carried not only kalashnikovs, but also G-4 hand grenade and bazookas. During the harassment fire the living location at the port was damaged. Hereat we had to surrender.

The crew is treated well by the pirates

The captain Temelta? expressed that due to the fact that the crew is Turkish and muslim they have been treated well by the pirates after being taken over by them¨. In Ely Marina, where the pirates made the Turkish flagged ship Karagöl anchore, there are 7 highjacked ships more, one of which is the bulk carrier YASA Neslihan.

At the time of debate with the pirates, we told that we would interfere them by no means. Within the bounds of this agreement, they let the crew speak to their families everyday for some minutes. We also asked the pirates to talk to our company and fort he time being they are negotiating about the ransom.

The captain Temelta? said that there are 14 Turkish crew on ship, plus about 25 pirates in the day time, twice more pirates at night.

Did Gökova part from NATO in reaction to it?

TCG Gökova frigate Gökova parted from NATO"s cruising line and changed to National Command Authority after two ships owned by Turkish rigger. According to the information of Turkish Maritime Magazine received from military source, due to the fact that NATO left the mayday of Turkish flagged ship KARAGÖL unanswered during the pirate attack, TCG Gökova Frigate parted from NATO command in reaction to NATO. It has also been declared that German RGS Rhön and Greek HS Themistokles, which were 20 miles away from the ship, neither sustained the call for help made by KARAGÖL, nor answered the call for help.

Below you can find the phone interview of Recep Canpolat, Turkish Maritime Magazine Executive Editor with the captain of hijacked Turkish ship Karagöl.

This news is a total 9438 time has been read