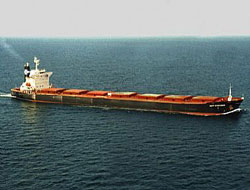 The bulk carrier CAPT. STEFANOS was released by its hijackers.

The vessel was captured by Somali pirates in September along with her crew of 19 in the Gulf of Aden.

Crew members are reported to be in good health and the ship is said to be heading for the port of Brindisi in Italy.

The EU has now officially started maritime operations in the Gulf of Aden to try and combat the rising number of pirate attacks. Over 330 sailors on board some 15 ships are still held hostage by gunmen operating from the lawless regions of Somalia. Increasingly the crews of ships are seen as the best bargaining counters by the pirates, as opposed to the ships and cargos.

However, the capture of the SIRIUS STAR, which is still being held, and its cargo of $100,000 of oil has shook many as has the taking hostage of the mv FAINA which is loaded with Soviet-era armaments.

This news is a total 950 time has been read