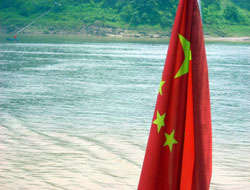 Successfully fought off the pirates by multilateral force with helicopters hovering over the ship.

Successfully fought off the pirates by multilateral force with helicopters hovering over the ship.

A multilateral force rescued a Chinese ship from Somali pirates on Wednesday, in a sign foreign navies patrolling the shipping lane linking Europe to Asia are adopting tougher new tactics. The Chinese boat Zhenhua 4 was one of four vessels seized by pirates on Tuesday, the same day the United Nations Security Council took a strong stand against the attacks and authorized countries to pursue the gunmen on land. A Kenyan maritime group said the crew locked themselves in their cabins and radioed for help. A warship and two helicopters came and fired on the pirates, but did not kill them, it said.

Chinese state media said a "multilateral" force with helicopters hovered over the ship and successfully fought off the pirates.

Rampant piracy off the coast of Somalia this year has earned gunmen millions of dollars in ransom, hiked shipping insurance costs and caused international alarm.

The seizures have prompted some of the world's biggest shipping firms to switch routes from the Suez Canal and send cargo vessels around southern Africa instead -- which could push up the cost of commodities and manufactured goods.

Foreign navies have rushed to patrol shipping lanes off the Horn of Africa nation, but have had little impact so far on the pirates who mostly operate out of northern Somalia.

According to the Andrew Mwangura of the East African Seafarers Assistance program, there have been 124 incidents of piracy off Somali this year and some 60 successful hijacks.

Nearly 400 people and 19 ships are being held along the coast, including a Saudi supertanker with 2 million barrels of oil and a Ukrainian cargo ship with 33 tanks.

Last week the European Union launched an anti-piracy operation with warships and aircraft from Britain, France, Greece and Spain, and pledged to take a "very robust" approach.

China is reported to be seriously considering sending naval ships to the region to escort vessels and Kenya said this week it would sink any pirates carrying out attacks in its waters.

Mwangura said on Wednesday the Chinese vessel, with 30 Chinese crew, and a yacht with two on board had been seized off Yemen a day earlier. A tugboat and a 100-meter (330-ft) cargo ship belonging to an Istanbul-based shipping company were also taken in the Gulf of Aden on Tuesday.

Analysts say the problem must be tackled on land as well, but the weak Somalian government says it does not have the resources to tackle the buccaneers.
The country has been in virtual anarchy since the collapse of a dictatorship in 1991. Islamist insurgents control most of the south and feuding clan militias hold sway elsewhere.

Somalia's neighbor Kenya also began extensive air and sea patrols this week. "We are daring them to try any attacks on Kenyan waters and we will sink them," Chief of General Staff Jeremiah Kianga said on Monday.

This news is a total 737 time has been read