HMAS Stuart and Sirius arrive in Malaysia for bilateral exercise 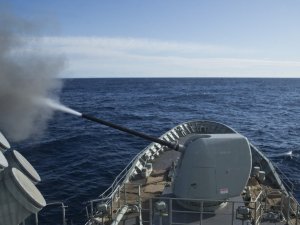 Fresh from a successful welcoming visit to the Philippines for Second World War 75th anniversary commemorations, HMAS Stuart and Sirius have sailed on to Malaysia for continued bilateral engagement.

Stuart’s Commanding Officer, Commander Luke Ryan said interacting with the two regional partners was an important part of the ongoing East Asia Deployment, in which 11 ships are participating in multinational exercises and engagement activities across the region.

“We were pleased to join the Philippine Navy to commemorate historic naval battles, and in Malaysia, we look forward to Exercise MASTEX 19, in which we will further develop the strong relationship we have with their Navy,” he said.

“The Task Unit’s transit between engagement activities is also valuable, as we use this time at sea to conduct routine training for our ship’s company.”

During the four-day transit from the Philippines to Malaysia, the ships conducted a replenishment at sea, engineering break-down drills and Officer of the Watch manoeuvres. Stuart’s MH-60R helicopter also conducted day and night flying.

Commander Ryan said that during the transit the two ships encountered the high level of the maritime traffic that is expected in busy international waters.

“As professional mariners, we travel throughout international waters as we transit between exercises and engagements. Along the way, we regularly encounter a variety of civilian vessels and other nation’s warships as they passage through international waters.

“Making contact with other vessels is not only a courtesy shared with fellow mariners but is an important factor in maintaining safety and protecting the environment,” Commander Ryan said.

In Malaysia, Stuart and Sirius will take part in Exercise MASTEX. This activity encompasses seven days of bilateral training exercises with the Royal Malaysian Navy, in the harbour and at sea, to enhance mutual cooperation.

For the next two months, 11 ships and more than 1000 Navy personnel across two task groups are visiting regional partners in North and South East Asia for multinational exercises and regional engagement activities.

This news is a total 158 time has been read
Tags: HMAS, Exercise MASTEX, HMAS Stuart and Sirius arrive in Malaysia for bilateral exercise