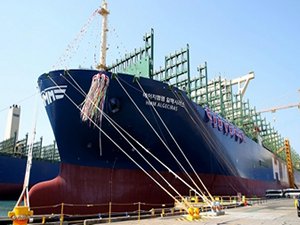 South Korea’s HMM has become the sixth container line to enter into a joint venture terminal in Singapore with PSA.

The new joint venture HMM – PSA Singapore Terminal (HPST) will be 58% owned by the Singapore terminal operator with HMM having a 42% stake. It is due to start operations at the end of the year subject to regulatory approvals.

HMM is taking delivery of a series of 24,000 teu newbuildings this year, the largest containerships currently operating globally and said the jv terminal would provide long term certainty for its hubbing operations in the region.

PSA and HMM will also plan to collaborate on operational technology developments and innovations.

Jae-hoon Bae, president & ceo of HMM, said: “We believe this joint venture terminal in Singapore plays a significant role as a springboard for both parties to move forward to a new phase. In addition, HMM looks forward to creating greater synergy for our 24,000 teu vessels by securing berth on arrival and providing more reliable services for our customers through the joint venture.”

It is the sixth joint venture container terminal PSA has entered into in Singapore. The terminal operator also has jvs with Cosco Shipping, CMA CGM, Ocean Network Express (ONE), MSC, and Pacific International Lines (PIL). It also has a joint venture automobile terminal with NYK and K Line.

PSA’s regional ceo of Middle East South Asia & head of business development, Wan Chee Foong, said the role of the hub port had been reinforced by supply chain disruption during in Covid-19 with lines using Singapore as staging hub for cargoes destined for congested gateway ports.