HMM Oslo heads for Europe with a full load 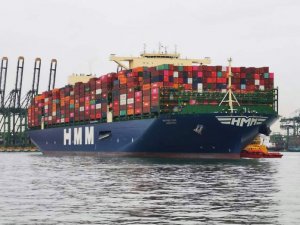 HMM Oslo, the company’s second 24,000TEU ship, has left for Europe, according to a company statement on 31 May, with all its slots full, repeating a feat achieved by sister vessel HMM Algeciras.

HMM Oslo began service on 11 May, loading containers in Busan New Port, Hyundai Pusan Newport, before moving on to Shanghai, Ningbo and Yantian in China. The ship then moved to Singapore before departing for Europe on 28 May.

It appears to be a sign that container shipments from East Asia are recovering, with China’s Ministry of Transport saying that container throughput for May is near the same volume as the same period in 2019.

On 29 May, Sun Wenjian, spokesperson for China’s Ministry of Transport, said at a media briefing that freight operations improved during the month, growing from the same period last year.

Without giving volumes, Sun said, “It’s particularly worth mentioning that cargo throughput and cargo tied to foreign trade registered growth year-on-year, and container throughput has been close to the level of the same period last year.”

In response to supply chain disruptions and falling consumer demand amid the Covid-19 pandemic, liner operators have blanked more than 500 sailings, resulting in cargo capacity contracting by over 25% from the same period last year.

Container shipping consultancy Sea-Intelligence CEO Alan Murphy said that such blank sailings have flatlined, and liner operators appear to be reinstating some sailings. However, Murphy cautioned against viewing the restoration of some sailings as a recovery in volumes, saying “It is also clearly shown by the data that this is purely a very small change to the overall development in blank sailings. It cannot be seen as a rebound in demand, nor can it be construed as ‘strong’ demand.”

This news is a total 288 time has been read
Tags: Busan New Port , China's Ministry of Transport , HMM , Sea-Intelligence