HMM Sells Half Interest in Algeciras Terminal to CMA CGM 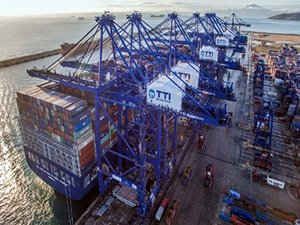 HMM announced it is entering into a joint ownership agreement with CMA CGM for a container terminal in the south of Spain known as the Total Terminal International Algeciras (TTI Algeciras).

HMM said that it expects the transaction will create a great synergy based on the strategic cooperation with CMA CGM. They expect to enhance profitability and operational capabilities by securing additional cargo at the port through the joint ownership arrangement.

Under the terms of the agreement, HMM will be selling a half interest minus one share in the terminal company to CMA CGM. As such, HMM will continue to be the largest shareholder in TTI Algeciras. HMM had acquired the terminal in 2017 from Hanjin Shipping and currently directly holds 50 percent minus one share in TTI Algeciras. The other half interest is currently being held by HT Algeciras, a special purpose company wholly-controlled by HMM.

“TTI Algeciras has a great geographical advantage to play an integral role as a trans- shipment hub located at the center of containerized cargo flow on main trade lanes,” said HMM. “We believe TTI Algeciras will take center stage in the Gibraltar area as it has a high potential for future growth and development. We are expecting more business opportunities in the years to come based on stable operations of the terminal.”

TTI Algeciras, which encompasses an area of 357,740 square meters began operations in May 2010. It has a maximum handling capacity of 1.6 million TEUs with eight ship-to-shore cranes, 32 automatic stacking cranes, and 21 shuttle carriers. The terminal can accommodate vessels including the latest and future generations of ULCVs (Ultra Large Container Vessels).

The transaction, subject to regulatory approval, is expected to be completed in the fourth quarter of 2020.

This news is a total 1286 time has been read
Tags: HMM Sells Half Interest in Algeciras Terminal to CMA CGM