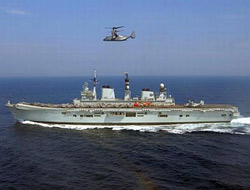 HMS Illustrious returns to her Portsmouth base today after scoring another first by embarking both Spanish and Italian Harrier strike aircraft for a NATO training exercise in the Adriatic.

Still breaking new ground in her 25th year of service...

HMS Illustrious returns to her Portsmouth base today after scoring another first by embarking both Spanish and Italian Harrier strike aircraft for a NATO training exercise in the Adriatic.

The carrier"s 25th year in service has seen her breaking new ground at almost every turn. Spending the majority of this year at sea, she has been involved in several important multi-national exercises, including a joint task force exercise off the eastern coast of the USA. She worked closely there with the US Marine Corps, embarking a squadron of their Harriers for two weeks and operating with an Osprey tilt-rotor aircraft.

In the Adriatic exercise, codenamed Noble Midas and hosted by Croatia, the Spanish and Italian Harrier AV8Bs were embarked in the carrier for almost three weeks, strengthening the understanding between the NATO colleagues.

When the 9th Spanish Squadron returned to Illustrious for a Spanish exercise last in November, they immediately fitted back into life on board as if they had always been a part of the ship.

HMS Illustrious"s new Commanding Officer, Captain Steve Chick, said today:
?The ship"s achievements over the past year have been very impressive, with nearly 2,000 aircraft movements on an off the deck involving 28 types of aircraft from eight different countries. I look forward to continuing this excellent record during my time in command.?

In the New Year, Illustrious promises to fulfil that prediction when she leads a multi-national, maritime task group of 14 vessels and 2,500 personnel from four navies in a major maritime security deployment to promote peace and stability in the Indian Ocean region.

Codenamed Orion 08, deployment will include Royal Navy, French, Spanish and US warships ? including a submarine ? and 20 fixed-wing and rotary aircraft. The force will be under the operational control of the RN and will visit 20 ports in the Mediterranean, in Africa, the Middle East, southern Asia and the Far East.

Under the command of Commodore Tom Cunningham RN, the task group will undertake a wide range of maritime security activities, including counter-terrorism, and anti-mining operations. It will work with at least ten other navies and exercise high-intensity anti-submarine warfare and ground attack support using embarked Harriers.

This news is a total 870 time has been read