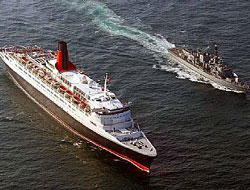 A standoff in Dubai fortuitously allowed HMS Lancaster the great honour of escorting the illustrious cruise liner, Queen Elizabeth II on the last few miles of her final voyage into Dubai, before she is converted into a luxury hotel.

Under the gaze of the international media, Lancaster sailed past the "World" (a man made set of islands in the shape of the world"s continents) her Ship"s Company in their best white tropical uniforms. They marched out onto the upper deck in the heat of the Dubai afternoon sun to pay their respects to the liner and conduct one final salute in recognition of her role as a hospital ship and troop carrier during the 1982 Falklands Campaign.

Initially taking station astern of the liner, HMS Lancaster conducted a sail past which saw the QE2 dip her flag in respect to one of Her Majesty"s Ships and Lancaster responding by dipping her White Ensign in return Sailing close on the QE2"s port side the Ship"s Company of Lancaster with caps held aloft also conducted three cheers for the distinguished liner.

The flotilla of ships was also made up of the world"s largest super-yacht, "Dubai" owned by His Highness Sheikh Mohammed bin Rashid Al Maktoum, Vice President and Prime Minister of the UAE and Ruler of Dubai, which was stationed ahead of the QE2 and also numerous vessels from United Arab Emirates" Coast Guard and many smaller yachts and pleasure craft from Dubai who came out to watch the flotilla. The flotilla was also joined overhead by the impressive sight of an Airbus A-380 conducting a fly past of the liner.

The Ship"s Company thoroughly enjoyed the opportunity to recharge their batteries in one of the most exciting cities in the world. The highlight for many was the Dubai Rugby Sevens. Lancaster was able to put a team into the International competition and they performed admirably, making the semi-finals of the plate competition. They then watched the England ? South Africa final (narrowly won by the Springboks) with the world"s largest ever Sevens crowd and an electric atmosphere. Other noteworthy events included a chance to go skiing (there is a purpose built snow ski run in the middle of the desert); 3 members of the Ship"s Company competing in the local triathlon; and plenty of time spent perusing the local shopping malls and gold souks. The ship is now headed back north to the Northern Gulf for her last patrol before the Christmas stand-off.

This news is a total 5789 time has been read