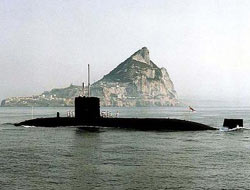 A British nuclear-powered submarine was damaged when it collided with rocks in the Red Sea, the Ministry of Defence has said.

A British nuclear-powered submarine was damaged when it collided with rocks in the Red Sea, the Ministry of Defence has said.

HMS Superb hit an underwater rock on Monday and damaged its sonar equipment, forcing it to surface.

None of the crew was hurt and the submarine is watertight, an MoD spokesman said.

Superb, a Swiftsure-class attack submarine with a crew of 112, hit an underwater pinnacle 80 miles south of Suez.

The 272-foot vessel had passed through the canal and was in the northern Red Sea when she grounded. No other vessel was involved.

An MoD spokesman said the submarine's nuclear reactor was "completely unaffected" and there was "no environmental impact" from the collision.

"There were no casualties and the submarine remains watertight, is safe on the surface and able to operate under her own power," he said.

The vessel is in international waters but unable to dive because of the damage to sonar equipment.

The Royal Navy is examining how to return the vessel to port and a full investigation is under way, with a Board of Inquiry to follow.

The crew's next of kin are being informed, the MoD said.

Last Friday the Telegraph reported on an official MoD inquiry which found that another nuclear submarine suffered £5 million damage after it crashed into the seabed because officers used tracing paper to plot her course.

Travelling at 14 knots (about 16mph), the 5,000-ton Trafalgar submarine crashed 165ft below the surface in waters off the Isle of Skye, Scotland, in 2002. Its nuclear reactor was undamaged.

Three crewmen were injured when the hunter-killer submarine turned into rocks because trainee commanders could not see vital symbols which had been covered by the paper.

Senior officers supervising the course were criticised for serious lapses after the tracing paper was put over charts to prevent pen marks damaging the maps.

The paper hid ocean bed contours and symbols which showed underwater current strengths. The boat's satellite navigating system had been turned off to increase the stress on the trainee captain during the examination nicknamed "Pressure Cooker''. Post-It notes were also placed over other vital systems to simulate battle damage.

The submarine required an 18-month refit when it finally limped back into the Faslane submarine base.

This news is a total 1468 time has been read