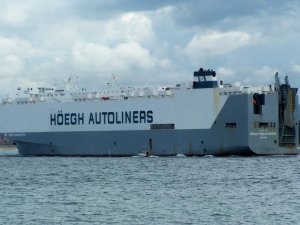 No crew have been arrested, and no drugs have been found on board, according to Höegh Autoliners.

No crew have been arrested, and no drugs have been found on board, according to Höegh Autoliners.

Last week, local media quoted one of the investigators as saying that they had found what ”appeared to be cocaine in crystal form” on board the 6,500 ceu car carrier. However, subsequent tests showed that the substance was in fact an anti-humidity powder dispersed around tires during long voyages, according to the local police.

However, investigators did find a consignment of undeclared handguns shipped by the United Nations from Mumbai, India, to Mombasa, inside UN vehicles in transit for the UN peacekeeping mission in the Democratic Republic of Congo. The vehicles had originally been loaded by Indian military personnel.

The undeclared weapons were reportedly confiscated by the police. They will be delivered under Kenyan escort to Indian peacekeepers stationed in DR Congo .

”It is Höegh Autoliners` policy not to load weapons on vessels engaged in civilian traffic. Had we been aware of the presence of guns inside this consignment of vehicles shipped by United Nations, the cargo would neither have been booked nor loaded. The fact that the vehicles contained guns which were loaded without our knowledge caused a breach of Kenyan laws and our own strict policies. It is highly regrettable that a grave mistake on the part of the shipper has caused major difficulties and delays for other customers, the crew and ship,” the company said in a statement.