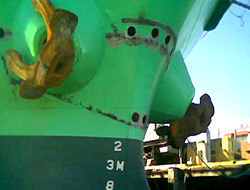 The unorthodox modifications allow the cargo ship to be manned by fewer crew as it is now officially classified as smaller than it is.

"This is extreme bending of the rules and I cannot see how they can get away with it," Auckland marine surveyor Hugh Munro said.

"I don't think anyone at the International Maritime Organisation would agree with this."

But Maritime NZ has allowed it to be classed as shorter than 45m after holes were drilled at the front to create a "false" bow. A new watertight bow was fitted several metres further back so the ship now officially measures only 45m.

Ships longer than 45m are also required to have more crew, with higher qualifications.

The "false bow" was stronger than the previous bow because of watertight internal modifications behind the holes, Mr Mansell said.

"We never intended shortening [the Anatoki] but we were left with no choice ... we were stuck with a vessel we could not operate."

A naval architect had produced the plans to create the new bow and Maritime NZ were "reasonably supportive" in agreeing to the modifications.

Mr Smith said some in the maritime community claimed the bow change was done to allow the company to cut crew numbers.

The ship operated in Japan with a crew of three, whereas in New Zealand it operated with four crew, with Maritime NZ agreement.

Had the agency not approved the modifications, the ship would have required a crew of at least seven, Mr Smith said.

Mr Munro, speaking personally and not on behalf of the surveying company he works for, said drilling holes in a ship "doesn't change the length of the vessel".

"Rules are rules, as Maritime NZ keep ramming down our throats." He agreed with other senior maritime industry sources that the matter made New Zealand a laughing stock.

But Mr Mansell disputed this, saying New Zealand had an excellent reputation for maintaining very high safety standards. The modifications to the Anatoki met all New Zealand's safety regulations for a coastal freighter, he said. 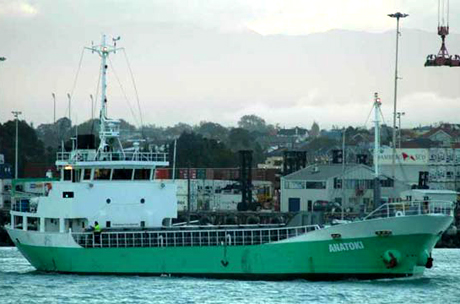 This news is a total 1479 time has been read