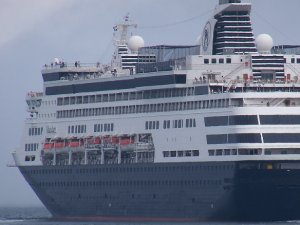 A cruise ship operated by Holland America Line, with 42 ill people on board, is en route to Florida after being turned away by ports in Chile.

As informed, all ill persons have been isolated and their close contacts placed in quarantine.

“Since it is flu season, and COVID-19 testing is not available on board, it is difficult to determine the cause of these elevated cases at this time,” the cruise line said in a statement.

The remaining passengers have been asked to stay in their staterooms, with meals provided by room service. Additionally, the crew who are not required for the safe operation of the ship are being quarantined.

Zaandam was sailing a South America voyage that departed Buenos Aires, Argentina, on March 7, and was originally scheduled to end in San Antonio, Chile, on March 21.

However, due to global health concerns, Holland America Line made the decision to suspend its global cruise operations for 30 days and end its current cruises in progress as quickly as possible and return passengers home.

“Despite previous confirmations that guests could disembark in Punta Arenas, Chile, for flights, we were not permitted to do so. No one has been off the ship since March 14 in Punta Arenas,” Holland America Line further said.

The 1999-built cruise vessel then sailed to Valparaiso, Chile, where it remained at anchor March 20-21 while taking on provisions and fuel, including regular medications. Zaandam departed Valparaiso on March 21 and is currently sailing north.

“Our intention is to proceed to Fort Lauderdale, Florida, for arrival on March 30, however we are still working on securing a reservation to transit the Panama Canal,” the cruise company explained, adding that alternative options are also being considered.

Maasdam, another cruise ship operated by Holland America Line, has been denied permission to disembark in Honolulu despite no coronavirus cases on board. A few days ago, only eight passengers were allowed to leave the ship in Hawaii, six of them being Hawaii residents and an injured passenger and her spouse. The vessel continued its journey to San Diego where it hopes to get docking permission on March 27.

This news is a total 212 time has been read
Tags: coronavirus, Cruise Ship, Holland America Line.