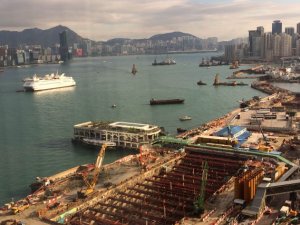 Hong Kong's port expects a slight rise in container shipping volumes this year despite continuing global turmoil in the sector.

The global container industry, which transports everything from bananas to iPhones, is showing signs of better returns after a near-decade long slump.

Nevertheless, worries over global retail demand and too many ships have continued to put the brakes on a bigger recovery.

"This year it is going up by a single digit percentage," Chan told Reuters on the sidelines of London International Shipping Week, adding that it was too early to forecast about 2018.

Trading and logistics account for 22 percent of Hong Kong's gross domestic product and 20 percent of its employment.

Hong Kong's shipping fortunes soared with the Pearl River Delta export boom of the 1990s, but its once world-leading port has slipped to fifth place by throughput, behind the mainland ports of Shanghai and Shenzhen.

Analysts view competition from other Chinese ports as posing a growing risk to Hong Kong.

With some of the highest real estate prices in the world, Hong Kong also faces difficulties with any potential expansion of port facilities.

"Hong Kong could do better if we have lower land prices, lower property costs," Chan said.

"We are trying to boost the higher value end of maritime cargo volume. So, we are hopeful," Chan said.

Hong Kong signed an agreement this week with Britain to deepen commercial co-operation in the maritime sector.

Hong Kong, which returned to Chinese rule in 1997, is undergoing a number of infrastructure projects including the construction of a 22.9 kilometre (14-mile) bridge across the Pearl River Estuary.

An extension of the city's airport runways, which is expected to be completed in 2024, is estimated to see air cargo volumes grow from 4.5 million tonnes currently to 9 million tonnes in coming years, Chan said.

He said Hong Kong sought to gain from Chinese President Xi Jinping's trillion-dollar push to build a modern Silk Road - known as Belt and Road - which aims to create land, sea and air routes from Asia to Europe. "We have to co-benefit from the Belt and Road initiative," Chan said. "It is not a game that the winning one takes all - it has to be a collaborative approach."

This news is a total 567 time has been read
Tags: Hong Kong Looks to Ride Out Boxship Turmoil