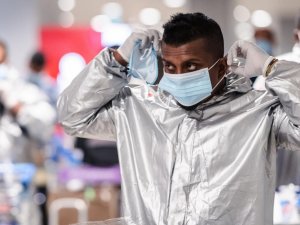 The third wave of Covid-19 infections in Hong Kong likely represents a setback for those hoping to see a greater easing on restrictions on travel and crew change by nations around the world.

In the space of just a few weeks Hong Kong has gone from being a success story in combating the virus, that has spread across the globe, to passing the psychological mark of 100 infections in a day on Sunday 19 July, and leader Carrie Lam saying Covid-19 spreading ‘out of control’ in the Special Administrative region.

The last week has seen a significant tightening in restrictions and social distancing rules although stopping short of the lockdowns that have been seen in many locations across the globe.

Hong Kong had led the way on crew change which had largely ground to halt globally, with the announcement of unrestricted crew changes from 9 June with no quarantine or testing requirements for seafarers.

As infections in Hong Kong started to rise in early July a requirement for a negative Covid-19 test for air and ship crews entering Hong Kong was reintroduced on 10 July.

The decision not to test air and sea crews was highlighted David Hui Shu-cheong, a professor in respiratory medicine from Hong Kong’s Chinese University in an interview with the South China Morning Post last week. “Two mistakes the government have recently made have caused the community outbreak: the exemptions for tests and quarantine for airline and cruise crews which brought many asymptomatic cases into the community, while a total lift of the eight-people rule in restaurants last month was also a failure,” Hui said.

At the end of June some 11 seafarers onboard the containership MSC Flavia tested positive for Covid-19 in Ningbo, nine of those who tested positive had boarded the vessel in Hong Kong.

None of this is good news for those in the shipping industry trying to persuade governments globally to ease up on travel restrictions for seafarers to try and solve the crew change crisis that has left 200,000 seafarers stuck on vessels after their contract periods ended, and similar number stuck ashore unable to join vessels as replacements.

This is not to say that crew changes cannot be done safely – it can, and indeed it is very much in the interests of shipowners and managers, and all other parties concerned that they are regardless of the regulations by individual governments. However, government officials in other countries are not going to be encouraged by the experience seen in Hong Kong in terms of lifting restrictions for seafarers or travel in general, which is also an essential part of the crew change jigsaw.