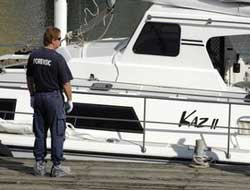 Rescuers searching for the missing crew of a yacht found deserted off Australia's Great Barrier Reef think it may have been drifting since Sunday.

One theory is that members of the three-man crew fell overboard in bad weather conditions, greatly diminishing the chances of finding them alive.

A search now has been scaled back to the north Queensland coast, in the hope that the crew made it to shore.

The Kaz II was found with its engine running and a table laid for dinner.

But there were no signs of any people.

The boat left Airlie Beach on Sunday bound for Townsville on the first leg of a voyage around northern Australia.

The 12m (40 foot) catamaran was spotted by a helicopter on Wednesday drifting off the Great Barrier Reef, but a rescue team only reached the boat on Friday, and confirmed that there was no one aboard.

Rescue crews say they are puzzled by the mysterious disappearance.

All the vessel's sails were up, although one was badly shredded, and lifejackets were still on board.

Mr Hall said rescue workers had recovered the boat's Global Positioning System (GPS) device, which might give them more clues as to the crew's whereabouts.

"That will now enable us to track backwards where this yacht has actually been in the last few days, and we're hoping that can pinpoint the search area for the missing crew," he said.

Australian media reported the names of the sailors as skipper Derek Batten, 56, and brothers Peter and James Tunstead, ages 69 and 63.

The three are neighbours in Perth, Western Australia.

The Australian Maritime Safety Authority said the men were planning to sail around northern Australia to Western Australia.

The KAZ II is now back in port.

Police forensic teams say they do not suspect foul play.

This news is a total 1356 time has been read