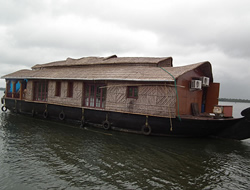 Is it a house or a boat? Does a coffee mug float? The Supreme Court struggled with all types of questions Monday as it tried to figure out what kind of floating structures fall under maritime law.

Is it a house or a boat? Does a coffee mug float? The Supreme Court struggled with all types of questions Monday as it tried to figure out what kind of floating structures fall under maritime law, a question that could have a profound impact on popular businesses like floating casinos, hotels and restaurants.

The question under discussion on the court’s first day of arguments was about Fane Lozman’s floating home — a gray, two-story vessel approximately 57 feet in length that he towed to the marina in Riviera Beach, one of South Florida’s poorest coastal cities. Lozman then started fighting with the city over a planned private redevelopment project for the marina.

The city in 2009 told Lozman, a former Chicago financial trader, his right to stay at the marina would be revoked unless he got the structure registered as a vessel and proved it could be moved when a hurricane or tropical storm threatened. The city also demanded payment of more than $3,000 in dockage fees. When Lozman refused to pay or leave the marina, the city used U.S. maritime law to impose a lien on the structure as a vessel. Lozman argued in court that it was a house (it had no engines, no bilge pumps, no steering mechanism, no lights or navigation aids), which would have given it some protection from seizure under state law.

But a judge sided with the city, and the property was seized, then bought by Riviera Beach for $4,100 and destroyed. The city has posted a $25,000 bond in lieu of Lozman’s property.

More than 5,000 Americans own floating homes, and there are more than 60 floating casinos in the United States that could be affected by this ruling.

Justices didn’t accept lawyer David C. Frederick’s argument for the city that the current description of a vessel as something that “floats, moves, and carries people or things on water” was clear enough to carry the day.

“A cup doesn’t float,” Frederick said. “Oh, well, this is lighter than you think,” Breyer retorted.

“How about a garage door?” added Justice Sonia Sotomayor.

Then Justice Elena Kagan jumped in: “Paste a couple of pennies on the inner tube. Now it carries things.”

Lozman’s lawyer, Jeffrey L. Fisher argued that his house clearly wasn’t a vessel, because it was dependent on the land to work properly. “A floating home cannot function if it’s not tied to land. It doesn’t matter how many amps we want to fight about. It’s whether it needs that power from land, whether it needs those connections to land. A houseboat, like any other vessel, can fully function away from port,” Fisher said.

But a couple of justices didn’t accept his definition either.

“Maybe these floating homes are just a poor man’s houseboat,” Kagan said. “The point of getting a floating home is actually to have a home that you can hook up to a boat and move from place to place, and so you don’t have to, you know, have the motor running all the time or have the capacity to move it all the time, but when you want to move it on water and when you want to move your possessions on water, you have the capacity to do so.”

This news is a total 7194 time has been read