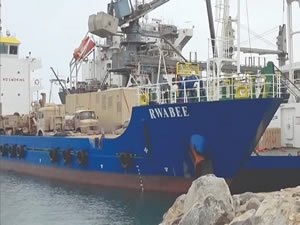 Saudi-led coalition accused on Monday Yemen's Houthi militia of "piracy attack and hijacking a ship sailing with the flag of the United Arab Emirates (UAE)," the Saudi Press Agency reported.

The Coalition Spokesperson Turki Al-Malki revealed that the attack took place on Sunday night when the cargo ship RWABEE was sailing off the coast of Yemen's Al-Hudaydah Governorate.

He accused the Houthis of risking the safety of navigation and international trade in the south Red Sea and Bab Al-Mandab Strait.

"The militia must promptly release the ship, or the coalition forces will take all necessary measures and procedures to handle it, including the use of force, if necessary," he warned.

The ship was conducting a maritime mission from the Island of Socotra, between the Guardafui Channel and the Arabian Sea to Jazan Port in southwest of Saudi Arabia, he added.

The coalition has been accusing Houthis of carrying hostile activities, including bomb-laden vessels in the Red Sea in a way that could harm international trade.

The coalition has attacked regularly Houthi military targets to deter the militia from launching drone and missile attacks against cities in Saudi Arabia, mainly border areas.

The coalition completed its sixth year of war in Yemen against the Houthis in March 2021 to support Yemeni President Abd-Rabbu Mansour Hadi.