How Environmentally Friendly Are LNG Tankers? 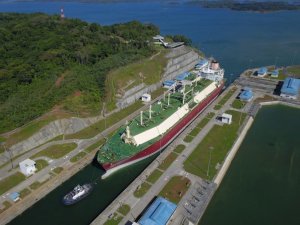 while President Donald Trump toured a new$10 billion plant designed to prepare natural gas for export, he made a vow. Such facilities would be good for the environment, he said, or they won’t get approved.

The president has greenlit 11 projects so far, bringing the U.S. total to 18. Environmentalists once touted the fuel, nicknamed “freedom gas” by the Trump administration, as a better energy alternative, but an analysis shows the plants’ potential carbon dioxide emissions rival those of coal.

Not all the export terminals are completed and in use, but if they were, simply operating them could spew 78 million tons of CO? into the air every year, according to data compiled by Bloomberg from environmental filings. That’s comparable to the emissions of 24 coal plants 1 , or 18 gigawatts of coal-fired power—more than Kentucky’s entire coal fleet. And those numbers don’t account for the harm caused by transporting the gas from wellheads to processing facilities and then overseas, which can be significant.

“The emissions from these projects can’t be squared with the sorts of drastic, drastic reductions we need in order to avoid catastrophic climate change,” says Nathan Matthews, a senior Sierra Club attorney.

As long as natural gas stays in the pipeline, emissions remain relatively low. But the sprawling terminals that export the fuel use ozone-depleting refrigerants to supercool it into liquid form, called LNG. They also belch toxic gases such as sulfur dioxide and release excess methane, a greenhouse gas more immediately destructive to the atmosphere than CO?.

Proponents of exporting natural gas, including government officials, argue that it will help wean other countries off coal, and that additional emissions here are offset by lower emissions abroad. But natural gas’s role in global warming is complicated. While the fuel has been key to reducing U.S. emissions as it displaces coal-fired power, the electricity industry’s growing dependence on it has nevertheless “offset some of the climate gains from this coal decline,” according to the Rhodium Group. With the effects of climate change already supercharging wildfires and flooding some coastal communities, the surprise that emissions from LNG terminals rival those of coal plants is not a pleasant one.

The surge in U.S. gas production has incentivized the buildout of other fossil-fuel infrastructure, such as petrochemical plants and pipelines. If all of them are built, they could add more than 500 million tons of carbon emissions annually by 2030, according to a study published in Environmental Research

“Industrial emissions such as these, that increase, can move us further away from climate goals,” says Avi Zevin, senior attorney at the New York University School of Law’s Institute for Policy Integrity, which did its own study of LNG. “Operation of LNG terminals produces billions of dollars of climate damages every year, which have to be added to the damages from emissions of the transported gas that will ultimately be combusted.”

The six export terminals currently in operation aren’t yet running at full capacity. At current operating levels, their maximum potential CO? emissions are equivalent to those of 5.2 coal-fired plants, according to Bloomberg calculations.

The plant in Hackberry, Louisiana, that Trump celebrated last spring, Sempra Energy’s Cameron LNG terminal, has one of the largest potential carbon footprints in the analysis—37% higher than the average of 18 facilities Bloomberg reviewed. The biggest potential polluter is Venture Global’s Plaquemines facility, also in Louisiana, whose emissions could be 58% higher than the average of all facilities. Sempra declined to comment, and Venture Global did not respond to emails or calls requesting comment.

A 2016 federal assessment of the Cameron plant said it would spew a maximum of 9 million tons of CO? a year once it’s fully operational. That’s 328,000 tons of the pollutant for every 1 million tons of gas exported, according to Bloomberg calculations.

Other plants have significantly smaller footprints. Annova LNG’s Brownsville terminal in Texas would emit just 59,000 tons of carbon dioxide for every 1 million tons of gas it exports, largely because it plans to use renewable energy rather than gas turbines to power the plant and has designed the facility to capture and recycle excess gas instead of releasing it into the atmosphere. “Annova LNG plans to be the lowest-carbon-emitting LNG export facility in the U.S. as part of its sustainability commitment,” the company said in a statement.

Freeport LNG, which began exporting gas from its Texas facility last fall, plans to reduce its emissions “by over 90% relative to other plants,” by using electric-drive motors instead of combustion turbines, CEO Michael Smith said in a Jan. 17 statement.

Significant Emissions Along the Way

While emissions from natural gas power plants are significantly lower than from coal plants, the benefits are diminished delivering LNG to Europe.

The reasons for the wide differences among plants are unclear, but some facilities generate their own electricity from natural gas rather than pulling it from a regional grid. That’s why, ultimately, Cheniere Energy Inc. sees a greater emissions intensity from its Louisiana terminal vs. the grid-reliant Texas facility, the company says. As of 2018, actual emissions from Cheniere’s two plants in Louisiana and Texas were lower than estimated in their environmental filings, according to EPA records. Both facilities are in the process of being expanded.

The biggest customers for U.S. LNG are South Korea, Japan and—until recently—China. But global demand is softening. Some of the planned export terminals may never be built. Six of the 18 approved plants are already operating, and four are under construction. “China and India would have to grow much faster than they are currently to justify all of this LNG that is being sanctioned,” says Akos Losz, a nonresident fellow at Columbia University’s Center on Global Energy Policy. The U.S. build-out will require “lots of additional demand, and we’re not seeing that materializing.”

Trade tensions have dimmed prospects for U.S. exports. China, one of the world’s biggest LNG importers, has cut purchases of American LNG by more than 80% since 2017. It’s unclear what effect the recent “phase one” trade deal between the U.S. and China will have on shipments.

The federal agency charged with approving the projects, the Federal Energy Regulatory Commission, argues that higher carbon emissions in the U.S. must be weighed against the potential for lower emissions abroad. “The impacts from greenhouse gas emissions are the same no matter where the facility is located,” FERC Chairman Neil Chatterjee said in a statement. “LNG exports shouldn’t be compared to domestic emissions but looked at in the context of how they help address greenhouse gas emissions globally.”

Emissions from the 18 planned natural gas export terminals would negate the carbon savings of all U.S. coal plants retired in 2018

To be sure, LNG offers many environmental benefits compared with coal, which emits more particulate matter, leaves behind toxic waste, and contributes to acid rain. LNG’s lifecycle emissions—the amount of pollution generated from the moment the gas is pumped to the time it’s consumed—are also generally lower. A 2019 U.S. Energy Department report found that LNG exports to Europe and Asia generated lower lifecycle emissions than locally mined coal used for power generation.

There is an exception. If the amount of methane leaked during gas production and transportation exceeds 3.1% over a 20-year period, LNG’s lifecycle emissions become comparable to those of locally mined coal, according to the agency. A 2018 report published in the journal Nature found that leaks across the U.S. now total 2.3% of oil and natural gas production. That figure doesn’t include flaring, or the intentional burning of methane, which has different impact on carbon emissions. In the Permian basin, the world’s highest-producing oil field, the largest producers are flaring an additional 5.1%, according to Rystad Energy.

FERC’s environmental reviews rely heavily on data and estimates supplied by developers. The agency almost never rejects applications due to environmental concerns. Last year, the commission announced plans to open an office in Houston dedicated to expediting approvals of LNG infrastructure, doubling down on the Trump administration’s commitment to gas exports.

(Michael Bloomberg, founder and majority owner of Bloomberg LP, the parent company of Bloomberg News, has committed $500 million to launch Beyond Carbon, a campaign aimed at closing the remaining coal-powered plants in the U.S. by 2030 and slowing the construction of gas plants.)