How hard is it to fall off a cruise ship? 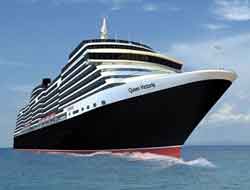 "It is so hard to fall overboard that when someone does go over the side, it's either because, sadly, it's a suicide attempt or it's because they're being incredibly foolish," said Carolyn Spencer Brown, editor of the website CruiseCritic.com

How hard is it to fall off a cruise ship?

"It is so hard to fall overboard that when someone does go over the side, it's either because, sadly, it's a suicide attempt or it's because they're being incredibly foolish," said Carolyn Spencer Brown, editor of the website CruiseCritic.com.

Yet three people went overboard from cruise ships in a 10-day period last month. Michael Mankamyer, 35, went overboard from the Carnival Glory off Florida's coast on March 16 and was rescued eight hours later. He said he had been drinking and that "alcohol took over with my medication."

On March 25 , a 22-year-old man and a 20-year-old woman went overboard on the Grand Princess in the Gulf of Mexico. They were found four hours later 150 miles off Galveston, Texas. Neither was seriously injured, and they asked the cruise line to keep their names, and the circumstances that led to the fall, private.

"I suspect that drink is usually involved in these kinds of occurrences," said Douglas Ward, author of the annual "Berlitz Complete Guide to Cruising and Cruise Ships."

Douglas Stallings, editor of "Fodor's Complete Guide to Caribbean Cruises" and "Fodor's Caribbean Ports of Call," pointed out that "you never hear of a child falling off a balcony. That's because the balcony dividers are quite high. Many of these incidents involve the excessive use of alcohol."

According to the Cruise Lines International Association, cruise-ship railings are required to measure 39.5 inches high (1meter), and while cruise lines determine their own alcohol policies, the drinking age on most North American itineraries is 21.

But what should you do if you witness a "man overboard"?

"Alert the crew immediately," said Julie Benson, a spokeswoman for Princess. If you don't see a crew member nearby, find a house phone and call the emergency operator. "And if you do happen to be in the vicinity of a railing where there are life rings, toss one of the life rings into the water."

All cruise passengers are required to attend "muster drills," where safety procedures are described. Some cruise ships even take attendance at the drills to make sure everyone knows the rules.

In the incident involving the Princess ship, the captain retraced the ship's path, then turned off the engines and air-conditioning and asked passengers to stay in their cabins and make as little noise as possible.

"When someone is in the water, you will most often hear them before you see them," Benson said. "A lot of passengers and crew did hear their calls in the pitch black." Searchlights found them in the water, and the ship made its next port of call, Costa Maya, Mexico, just three hours late.

"They did an outstanding job," said Ward. "I really applaud their efforts." But he added that any rescue operation like this "puts a very big strain on the rest of the passengers. If I were the cruise lines, I would actually charge for search and rescue."

According to the CLIA, 12 million people a year take cruises, and "in 2006, cruise lines provided Congress with data that showed that less than one per one million cruise passengers went missing over a three-year period."

Critics of the industry, including an organization called International Cruise Victims, allege that some passengers vanish as the result of foul play, and they blame cruise lines for failing to thoroughly investigate. Son Michael Pham of Seattle, vice president of International Cruise Victims, sent his elderly parents on a cruise from Puerto Rico and they were never seen again. In another high-profile case, George Smith IV of Greenwich vanished on his honeymoon on a Mediterranean cruise.

A congressional hearing held by the House Transportation maritime subcommittee late last month described current record-keeping on cruise-ship crime as spotty. Cruise-ship operators announced at the hearing a voluntary new agreement with the FBI and the Coast Guard to improve and standardize crime reporting. Several lawmakers suggested, however, that crime-data reporting needs to be mandatory, not voluntary.

Stallings said that despite the publicity over such incidents, "I honestly think cruise ships are considerably safer than any other place you're likely to vacation."

But Spencer Brown said passengers still "need to take the same precautions they take in a resort or at home. And they need to take responsibility for their own behavior."

A day after the latest rescue, CruiseCritic.com asked readers, "Is it possible to accidentally fall overboard?"

Sixty percent of the 2,200 people who responded to the unscientific online survey said, "Yes, if you're drunk and stupid."