How Not to Fight Climate Change, Shipping Edition 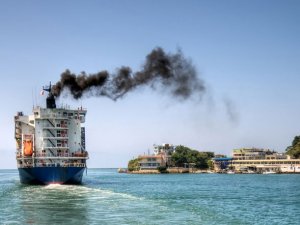 The shipping industry accounts for more greenhouse gas emissions than airplanes, buses or trains. Yet it was not included in last year’s Paris accord — and an attempt last month to redress this failure manages to be both unambitious and impractical.

The world’s 90,000 shipping vessels burn about five million barrels of petroleum products each day, and their emissions are expected to increase as much as five-fold by 2050. In part because it’s not clear which countries should be accountable for the emissions of any particular ship, the industry has not been part of any recent international climate agreements.

So a United Nations agency recently announced a deal: Countries promised to aim to agree on a strategy for cutting carbon emissions from shipping — by 2023. No word about when emissions might actually start falling. Or how much. Or how. It is an agreement to seek an agreement.

That lethargic pace ignores the easy and relatively inexpensive steps that ship operators could take right away to reduce their emissions. Simply polishing a ship’s propellers, for example, which makes ships run more efficiently, can reduce emissions by as much as 8 percent. And the simplest way for ships to cut their carbon emissions is just slowing down. So-called “slow steaming” increases the time it takes for products to reach market, obviously, and could also increase costs. Yet it also cuts wind and water resistance and fuel use, reducing carbon emissions by as much as 30 percent.

If the UN were serious about combating climate change, it could set speed limits by ship type, monitored by transponders and enforced by countries whose flag each vessel flies.

Ultimately, the most efficient way to cut global emissions is for countries to adopt a carbon tax, equal to the cost of the environmental damage done by each ton emitted. Putting a price on carbon can be a complex undertaking, but it is by no means impossible. And a sensible carbon tax would give companies in every part of the economy, including shipping, an incentive to seek the most affordable changes to how they operate.

This news is a total 3678 time has been read
Tags: How Not to Fight Climate Change, Shipping Edition