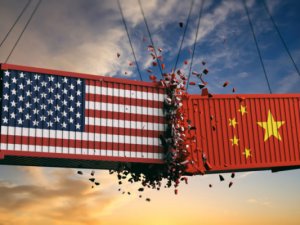 By Ann Koh and Serene Cheong (Bloomberg) –The trade war and China’s economic shift made 2018 a tough year for global shipping and will continue to reverberate through the industry, according to the United Nations Conference on Trade and Development.

Maritime shipping volumes grew just 2.7% to 11 billion tons last year, UNCTAD said in its annual review of the maritime industry, less than a 4.1% expansion the year before. The slowdown was broad-based with geopolitical turmoil, recessions in some emerging markets and Brexit also playing a role.

While the UN agency forecasts that growth will average 3.5% over 2019 to 2024, it said that uncertainty remains an over-riding theme and that risks are tilted to the downside. Here are four charts showing the changes in global shipping.

The U.S.-China trade war has reshaped global shipping flows, with merchandise trade between the world’s two biggest economies projected to have fallen by 15% since the second round of tariff hikes in September 2018, UNCTAD said in the report. A 10% increase in the price of imported goods in the U.S. is estimated to result in a 6% decline in container volumes from China, it said, citing data from Drewry Maritime Research.

Soybeans have been at the center of the dispute, with Chinese imports of the raw ingredient from the U.S. slumping as relations worsened. That’s prompted buyers in Asian nation to purchase more from Brazil, resulting in a shift in traditional trade routes.

Around 2% of global maritime trade has been affected by the trade war, Frida Youssef, the chief of the transport section of the trade logistics branch and one of the report’s author’s, told reporters at a briefing in Singapore on Wednesday. “To change the supply chain is not easy for the shipping industry and will require further investment.”

While the trade war is slowing China’s growth, it’s economy is also undergoing a transformation away from infrastructure-building and manufacturing toward consumer-led expansion. That’s resulted in big declines in imports of coking coal and iron ore that are used to make steel. Asia’s other economic giant, India, is also slowing, with UNCTAD estimating it will expand 6% this year from 7.4% in 2018.

Seaborne flows of goods and raw material into China accounted for about a quarter of worldwide maritime trade, according to UNCTAD. That means its economic transformation is having a big impact on global volumes of dry bulk trade, the mainstay of the shipping trade.

Iron ore and coal together represent more than 40% of global dry bulk trade and risks associated with the over-reliance of maritime transport on China’s demand for these commodities have been building for the past few years, the UN agency said.

China’s decision in early 2018 to stop being the dumping ground for the world’s plastics waste has also affected global shipping, UNCTAD said. While Southeast Asia subsequently started taking a lot of the rubbish, many of the region’s governments have now imposed similar bans.

East-bound container shipments from Europe to Asia fell by 1.3% in 2018 even as west-bound volumes grew 5.7%. The Chinese ban is also likely to increase the incidence of empty containers in the overall traffic handled by ports, the UN agency said.

This news is a total 1901 time has been read
Tags: China, shipping, trade war