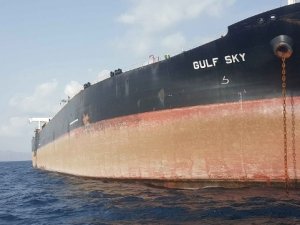 At the time of writing, those concerned await the news of the apparent imminent repatriation of the remaining two crewmembers from Tehran, including one AB and an engineer.

Human Rights at Sea and the Dominica Flag State Administration remain closely engaged in the background investigations into the incident of the hijacking of the tanker Gulf Sky (IMO 9150377) on 5-6 July 2020 from UAE to Iranian waters. 26 of the 28 crew - who had been deprived of their liberty and threatened with being shot during the ordeal - have been repatriated to India. This has included close engagement with the UAE Federal Transport Authority.

At the time of writing, those concerned await the news of the apparent imminent repatriation of the remaining two crewmembers from Tehran, including one AB and an engineer.

Based on the facts made available, both organizations are of the view that the crew have been used as pawns in this incident, which now has geopolitical ramifications. According to the captain’s personal account, this was not the case of a daring escape to freedom by unpaid crew during the COVID-19 crisis.

“From the numerous statements taken, the video testimony calls that have occurred these six days and the personal engagement we have had, undoubtedly the crew have been through a traumatic experience, have been in fear of their lives, and some still remain so," said CEO David Hammond.

Human Rights at Sea and the Dominica Maritime Flag Administration reiterate their primary concern for the health, safety and well-being of the crew, and have been in contact with welfare organizations to confirm support for those crew who both need and request it. It is understood that ITF, ISWAN and the Mission to Seafarers have been in separate contact with the crew.

This news is a total 1225 time has been read
Tags: HRAS: Hijacked Oil Tanker's Crew "Used as Pawns"