HSH Nordbank staying on a growth 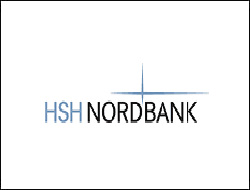 HSH Nordbank concluded more new business than ever before last year. The Bank granted loans for a total amount of around EUR 40 billion.

HSH Nordbank concluded more new business than ever before last year. The Bank granted loans for a total amount of around EUR 40 billion.

The growth in earnings of the core business units Shipping, Transportation and Corporates was well up in double digits. ?We have provided proof of the efficiency of our business model despite the financial crisis,? said CEO Hans Berger at the annual press conference on the 2007 financial statements of HSH Nordbank in Hamburg. Despite the turbulence on the international financial markets HSH Nordbank posted net income of EUR 285 million in 2007 (2006: EUR 830 million). Reasons for the decline are a comprehensive risk provisioning and impairments connected with the crisis on the financial markets. ?The operating strength of HSH Nordbank has enabled the Group to take into account market developments in 2008 in the 2007 financial statements,? said Hans Berger.

For the first time the Bank prepared its annual financial statements in accordance with the International Financial Reporting Standards (IFRS). ?We are thus fulfilling the principal demands of the capital market and ensuring a high degree of transparency?, said Berger.

Net commission income proved to be strong under the unpleasant market conditions and only went down seven percent to EUR 326 million.

The loss on hedging instruments came to EUR 13 million (gain of EUR 33 million in the previous year). Heavy strain was put on net trading income, which declined from a positive figure of EUR 169 million in 2006 to a negative one of EUR 591 million because a large part of the impairments on the credit investment portfolio was absorbed here, in line with IFRS principles. Net income from investments was also weighed down by the crisis on financial markets, falling to a negative figure of EUR 342 million (2006: plus EUR 169 million). Other operating profit was up by EUR 69 million to EUR 149 million in 2007.

The personnel and operating expenses, combined in the administrative expenditure item rose by 14 percent to EUR 984 million last year. At EUR 485 million, operating expenses were 11 percent higher than in 2006. Personnel expenses were up 16 percent to EUR 498 million. This reflects above all an increase in the number of employees of 325. As of December 31, 2007, HSH Nordbank employed a total of 4,756 people all over the world. In addition, a considerable amount was spent on personnel development.

Operating profit weighed down by the financial markets crisis

Operating profit was down to EUR 148 million (2006: EUR 1,195 million) as a result of substantial writedowns on the credit investment portfolio.
Strains due to financial markets crisis charged against earnings.

In order to counteract the strain caused by the crisis on the financial markets as comprehensively as possible, HSH Nordbank took an extremely conservative approach in evaluating the corresponding items. For instance, revaluations amounting to nearly EUR 1.3 billion were charged to the income statement. An amount of only EUR 64 million was allocated to the revaluation surplus.

The charges on earnings also had an impact on the principal earnings ratios. For instance, the cost/income ratio rose to 87 percent (2006: 38.2 percent) as a result of higher risk provisioning. This figure however is hardly significant for 2007. Development of costs was according to plan. The after-tax return on equity came to 6.4 percent (2006: 19.7 percent). The Tier 1 capital ratio (including market risk position) increased to 6.2 percent (2006: 6.1 percent). Total assets went to EUR 204.9 billion, rising 5.4 percent. (2006: EUR 194.3 billion) Successful business trends in the segments

HSH Nordbank raised its operating profit in its shipping business unit by 40 percent to EUR 334 million in 2007 (2006: EUR 239 million). As in the previous years, the main contribution came from net interest income. Net commission income was up as well because HSH Nordbank has to an increasing extent been providing services going beyond the finance business, including assistance in takeover transactions. New business rose in size once again to EUR 11.8 billion (2006: EUR 10 billion, up 18 percent) despite the difficult market setting in the fourth quarter of 2007. The return on equity before tax came to 70.2 percent in 2007 (2006: 59.2 percent).

The pre-tax operating profit of the Transportation business unit rose by 14.7 percent to EUR 81 million (2006: EUR 70 million). The volume of new business stood at EUR 4.8 billion. The strong position of HSH Nordbank in financing aircraft, rolling stock and infrastructure was further expanded in 2007. Complex finance deals and capital-market products are increasingly in demand in this unit. The return on equity before tax came to 28.3 percent in 2007 (2006: 27 percent). HSH Nordbank set up the Energy unit effective January 1, 2008. This unit will be responsible for financing projects involving renewable energies. HSH Nordbank has occupied a top position in this growing market for years now.

This segment combines the savings banks, leasing and private banking operations. Operating earnings before tax came to EUR 116 million (2006: EUR 124 million, down 6.7 percent). The leasing business was expanded considerably, although this increase was also characterized by heavier pressure on margins.

Collaboration with savings banks was increased, a development that was also reflected in higher earnings. The Private Banking segment, whose focus is on high net-worth private individuals, invested heavily in staff and new office locations and thus recorded a decline in its operating profit despite higher income. The return on equity of the Institutions & Private Banking segment came to 39.6 percent (2006: 43.8 percent, down 4.2 percentage points).

Business of HSH Nordbank"s capital-markets units was affected by the crisis on the financial markets. The operating result before taxes dropped to a loss of EUR 1.053 billion (down from a profit EUR 300 million in the previous year). The decline was attributable to impairments in the credit investment portfolio totaling EUR 1.3 billion. Of this figure, EUR 563 million were in the subprime sector. This result was partly offset by higher interest and commission income. Cross-selling was successful as well: sales of capital-market products to the clients of other business units were increased significantly.

HSH Nordbank expects the situation on the financial markets to remain very uncertain in 2008. ?We have, however, demonstrated that we have a business model which is both successful and crisis-proof,? said Chief Executive Officer Hans Berger. ?For this reason, we will continue on our growth course.? New business will continues to be gratifying in 2008. ?We are already having new business with a volume of approx. EUR 31 billion under examination,? added Berger.

This news is a total 871 time has been read