Hundreds of people are missing 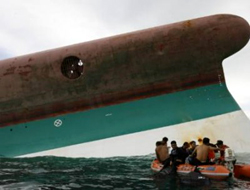 Libyan officials said at least 21 people had died and about 20 were rescued after a boat reportedly carrying 250 people went down.

There are unconfirmed reports that a second boat, carrying more than 300 people, also sank in the same area.

Tens of thousands of migrants attempt to reach Europe by sea every year.

The vessel carrying more than 250 people ran into difficulties shortly after setting off from Sidi Bilal, near Libya's capital, Tripoli.

In Cairo, Egyptian foreign ministry official Ahmed Rizk said the boat had sunk some 30km (19 miles) off the Libyan coast after getting holed in the hull.

"Libyan search and rescue operations led to the recovery of the bodies of those who drowned as a result of the accident, among them the bodies of 10 Egyptians," said Mr Rizk.

The nationalities of other migrants on the boat were not immediately known.

Unconfirmed reports from Reuters news agency said another boat with 342 migrants aboard had also sunk after leaving Libya.

A Libyan official, who did not wish to be named, told Reuters news agency on Monday that both shipwrecks had taken place "in the past two days" and that search and rescue operations were continuing.

The agency's Libyan sources said that two more boats were "drifting off Libya's coast but we do not know the exact conditions and the number of the migrants on board".

Libya has become a popular transit point for illegal migrants hoping to start a new life in Europe.

There are conflicting reports about the number of boats that may have sunk off Libya in the past two days and the number of migrants they may have been carrying.

Our correspondent says many of the would-be migrants come from Egypt, where there is a high rate of youth unemployment. They usually head for Italy.

Often the vessels they use are not seaworthy, which can mean they end up in difficulties, our correspondent adds. At least 40 people drowned when a boat sank while making the crossing last June.

Italy has announced that it will soon start joint sea patrols with Libya aimed at stopping the heavy influx of illegal migrants.

This news is a total 3457 time has been read