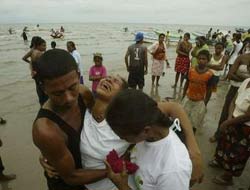 Hurricane Felix became an extremely dangerous category 5 storm as it swept through the southern Caribbean on a path toward Central America and Mexico's Yucatan Peninsula.

Forming from a tropical wave on August 31, it passed through the southern Windward Islands on September 1 before strengthening to attain hurricane status.

Felix made landfall just south of the border between Nicaragua and Honduras in a region historically known as the Miskito Coast.

At least 133 deaths have been attributed to Felix.

Here are a number of photos from space and flooding caused by Hurricane Felix..

This news is a total 797 time has been read