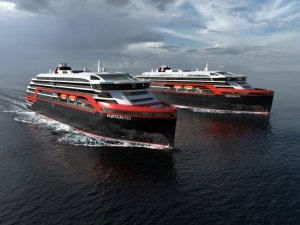 Norwegian expedition cruise line Hurtigruten is building a new line of expedition ships using hybrid technology that will, for the first time ever, allow fully electric propulsion on a passenger cruise ship.

The previously announced ships, two in total, will be constructed at Kleven Yards in Norway and are designed expedition cruises to the Arctic and Antarctic. The design for the ships, including the hybrid solution, is provided by Rolls-Royce.

The hybrid propulsion will allow for fully electric propulsion for short periods of time – approximately 15 to 30 minutes, according to Hurtigruten. The company says the hybrid technology will reduce fuel consumption by as much as 20 percent, resulting in CO2 emission of a 6,400 metric tons per year compared to traditional ships.

“The future of shipping is, without a doubt, silent and emission free,” says CEO of Hurtigruten, Daniel Skjelda. “We will use our new expeditionary ships as groundbreakers for this new technology and show the world that hybrid propulsion on large ships is possible.”

The new hybrid technology is being developed in two phases. The first ship, which will be ready in 2018, is equipped with an auxiliary electric engine, which will reduce the CO2 emissions by 20 percent. The second ship is to be built with a fully-fledged hybrid engine that can power the entire ship for longer periods of time and distances, such as into fjords and most importantly in vulnerable areas. The end goal is to refurbish the first ship with the same technology at a later time.

“To be able to sail using only electrical power is not only a great benefit for the environment, but it will also enhance the impact of experiencing nature for the guests,” added Skjeldam. “Picture sailing into a fjord silently without any form of emissions.”

Hurtigruten says the investment in the new technology represents a total investment of 124 million NOK ($15 million USD). Enova, a Norwegian government enterprise responsible for promotion of environmentally friendly production and consumption of energy is contributing to the project with 45.1 million NOK

This news is a total 13767 time has been read
Tags: Hurtigruten: New Expedition Cruise Ships to have Full Hybrid Propulsion