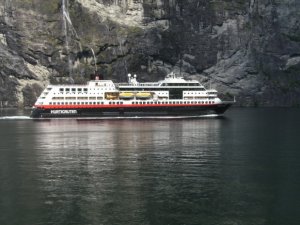 Norwegian expedition cruise operator Hurtigruten has started testing a new biodiesel fuel that has the potential to reduce emissions up to 95 percent.

The company noted that the fuel that is being tested on board the ship MS Polarlys was free of palm oil.

The tests started several weeks ago, according to the company, and will continue in the coming weeks.

Hurtigruten stressed that the shipping industry stands for the use of more than 330 Mt fuels every year and is the cause of 2-3 percent of all global CO2 emissions.

“We are just at the beginning when it comes to using biodiesel in the shipping industry. We want to move the boundaries and learn more about how this can be used in a bigger scale,” Daniel Skjeldam, Hurtigruten CEO, said.

“Hurtigruten wants an international ban of use of cheap, polluting heavy fuel oil the whole Arctic area and along the Norwegian coast. It makes no sense to create more pollution and increase the risk of spills and destruction in areas that need to be protected.”

In addition to the biodiesel tests, the Norwegian cruise company has also signed a 7.5-year liquefied biogas (LBG) supply deal which is said to be the largest ever contract of its kind involving a shipping operator.

Hurtigruten intends to replace conventional engines with gas-powered engines and large battery packs on at least six of its ships by 2021. The hybrid ships will run on a combination of clean electric power, liquefied natural gas (LNG) and LBG.

As explained, LBG can be mixed with and used on same tanks and engines as LNG, taking advantage of existing infrastructure and technology.

What is more, the company has recently welcomed a new battery-hybrid powered ship, the MS Roald Amundsen, earlier this year. Roald Amundsen is the first of three 15,000-ton hybrid-powered vessels ordered by the company.

This news is a total 473 time has been read
Tags: Biodiesel, Biofuel, Hurtigruten, MS Polarlys.