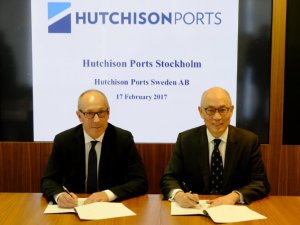 Port investor, developer and operator Hutchison Ports has entered into an agreement with Ports of Stockholm to operate the container terminal under construction at Stockholm Norvik Port.

The new container terminal will boast 450 metres of quay with a depth of 16.5 metres alongside when it opens in 2020. Future expansion will lift capacity at the port to 450,000 TEUs per annum.

Located near Nynäshamn, the new port will have better access, deeper water and greater capacity than the city-centre facilities it will replace, according to Hutchison Ports.

“As the only deep-water container facility on the East Coast of Sweden, Norvik Port will deliver both economic and environmental benefits by reducing overland transport, bringing ships and cargo closer to the country’s largest market,” Cheng added.

Hutchison Ports has operated Container Terminal Frihamnen in central Stockholm since 2009. The existing terminal will be redeveloped by Ports of Stockholm for residential and amenity purposes once the new facility opens.

This news is a total 878 time has been read
Tags: Hutchison Ports to Operate Stockholm Norvik Port