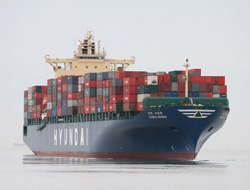 More oil carriers and vessels are contracted at higher prices

Still, the total for new vessel orders dropped 71 percent to $728 million last month, the third straight decline. New orders for ships in August tumbled 94 percent to $112 million from $1.74 billion a year earlier, the shipbuilder said, as demand for container vessels slowed on concerns over weakening trade in the world because of sluggish economy.

New orders for cargo-box carriers more than halved to 35 in the first eight months of this year, from 72 in the same period of last year, according to the filing.

Sales in the first eight months of the year advanced 22 percent to 12.24 trillion won, Hyundai Heavy said. New orders in the period climbed 19 percent to $22.35 billion. Of the total, vessel contracts rose 8.9 percent to $13 billion, while offshore oil rig and platform orders nearly tripled to $1.85 billion.

The company delivered 62 vessels worth $6.5 billion built to transport oil, consumer goods, liquefied natural gas and other products through August this year, compared with 58 vessels worth $4.4 billion a year earlier. Hyundai Heavy had an order backlog for vessels worth $37 billion at the end of August.