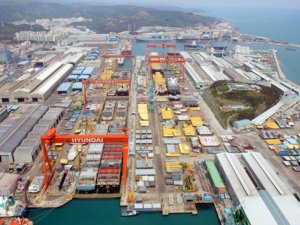 South Korea’s Hyundai Heavy Industries (HHI) said yesterday that it will split its non-shipbuilding businesses into separate companies to improve management efficiency and competitiveness amid the crisis in the shipbuilding sector.

According to a plan approved at a board meeting of the shipyard on Tuesday, HHI will be divided into six business divisions, namely shipbuilding and offshore plants, engines, electric and electronics, construction equipment, refinery and energy, by the first half of next year.

The company said, “There was inefficiency because our management was centered on shipbuilding and it was difficult for other business that record smaller sales to secure individual competitiveness.”

The restructuring move will be completed by the first half of next year and existing stakeholders will be retain a reduced share in the company and be given shares in each of the three other entities.

Hyundai Heavy shifted to a net profit of KRW971bn ($832m) in the first nine months of this year, from a net loss of KRW985bn a year earlier.

This news is a total 3126 time has been read
Tags: Hyundai Heavy Industries confirms spilt