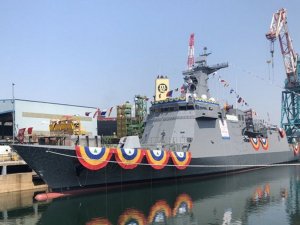 The launching ceremony for the country's second missile-frigate, the BRP Antonio Luna (FF-151), will take place at the shipyard of South Korean shipbuilder Hyundai Heavy Industries (HHI) in Ulsan on Friday, November 8.

The event comes six months after the keel laying of BRP Antonio Luna and the ship launch of BRP Jose Rizal (FF-150). The Philippines and HHI signed a PHP16- billion contract for two missile-armed frigates with another PHP2 billion set aside for its weapon systems and munition in October 2016.

The steel-cutting for BRP Jose Rizal took place on April 1, 2018, while the same ceremony for BRP Antonio Luna transpired on November the same year. These events officially signified the start of the actual construction of the frigates. Meanwhile, the keel-laying ceremony for BRP Jose Rizal took place in October 2018 as the formal recognition of the start of the ship’s construction. BRP Antonio Luna is named after the Filipino revolutionary general known for his stiff resistance to the then invading American forces.

The two frigates were designed based on the Incheon/FFX-I/HDF-3000-type multi-purpose frigate of the Republic of Korea Navy. The ships are armed with Oto Melara 76mm super rapid gun, Aselsan SMASH 30mm remote-controlled established naval gun, anti-submarine torpedoes and anti-air and ship missiles.

Each vessel is capable to carry more than a hundred officers and crew. It also features a flight deck towards the stern with the ability to handle one maritime helicopter weighing up to 12t. A hangar will also be fitted to accommodate the helicopter. It will also be equipped with two rigid-hulled inflatable boats for military and emergency operations at sea.

The Jose Rizal-class frigates of the PN are also equipped with a Hanwha Systems' Naval Shield combat management system (CMS), which integrates all shipboard sensors and weapons and decides on which is ideal to deal with any incoming threats. The system can also detect and track air, surface and sub-surface targets and is used in various configurations by the Republic of Korea Navy, Royal Malaysian Navy and the Indonesian Navy.

Expected in the event are PN flag-officer-in-command, Vice Admiral Robert Empedrad, and other ranking naval officers. BRP Jose Rizal will be delivered to the PN by April 2020 while the BRP Antonio Luna is scheduled for September of the same year.