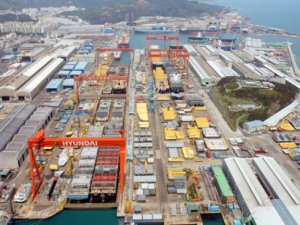 South Korean shipbuilder Hyundai Heavy Industries (HHI) has pushed through a rotational leave system for five weeks from September 11 for its shipbuilding employees.

About 610 shipbuilding employees will take leave until October 22, and get paid 70% of their salary during the period. HHI plans to execute this rotational leave system with 7% of its 8,400 shipbuilding workers and further cut its idle labour force through the first half of next year.

HHI has been forced to pare back activities over the past 18 months as its orderbook has dwindled. It has sold assets, slashed its workforce and shuttered some drydocks, much of which has found its senior management in direct confrontation with the unions who have initiated strikes this year.

This news is a total 1235 time has been read
Tags: Hyundai Heavy Industries pushes through rotational leave system