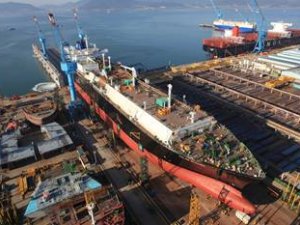 The South Korean government has urged ailing industries to speed up restructuring efforts to help revive Asia's fourth-biggest economy. Companies such as Daewoo Shipbuilding & Marine Engineering and the country's No. 1 shipping company Hanjin Shipping have already had to undergo debt restructuring with creditors due to a severe downturn in their respective industries.

Hyundai Heavy Industries said it will carry out "voluntary retirement of manager-level employees" without identifying the target number. The shipbuilder also said it plans to sell off non-core assets such as recreational facilities.

South Korean newspaper MoneyToday said the shipbuilder plans to sell about 1 trillion won's ($855 million) worth of stocks it owns, and other assets such as golf memberships and property and buildings. It said the plan also includes letting go of 3,000 workers, or nearly 10 percent of the company's total workforce, citing the shipbuilder's internal documents.

A spokesman at Hyundai Heavy declined to comment, but said it plans to submit "self-rescue" measures to its lead creditor KEB Hana Bank this week.