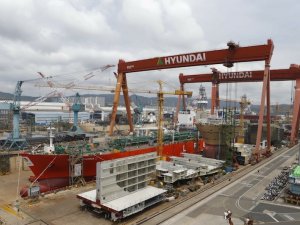 The world’s largest shipbuilder Hyundai Heavy Industries is set to slash 10% of its workforce this year as part of the South Korean shipbuilding group’s restructuring plan, Yonhap News reports.

HHI is set to announce details of its plan next week, which are expected to include job cuts and the sale of non-core assets, Yonhap reported.

“We are considering multiple measures to ride out the worst crisis that we have ever faced. But we can’t provide any undecided details on the (self-help) efforts,” Yonhap reported a HHI spokesman as saying.

Asian shipbuilders had a brutal year in 2015 as low oil prices, overcapacity and lower freight rates hit nearly every shipbuilding sector, and it seems 2016 will offer no such relief.

According to Yonhap, Hyundai Heavy Industries employs about 27,000 people, so with a 10% reduction we’re looking at about 2,700 jobs lost.

This news is a total 13368 time has been read
Tags: Hyundai Heavy Industries to Slash Workforce by 10% -Yonhap