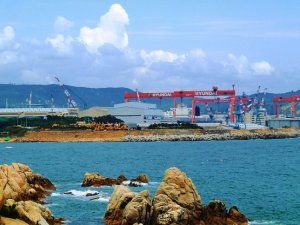 The order, worth KRW 112.7 billion (around USD 94 million), has been placed by an undisclosed European company, according to Hyundai Samho’s stock exchange filing released on October 10.

The shipbuilder is scheduled to deliver the vessel by the end of Q1 2021.

At the end of September 2019, HSHI also secured a contract to build two 158,000 dwt crude carriers. Ordered by an Oceanian shipowner, the ships are expected to be delivered in late May 2021.

HSHI recorded sales of KRW 1.6 trillion in the first half of 2019, a drop of 35 percent from the corresponding period last year. However, its operating profit for the period increased, Yonhap News Agency reported.

This news is a total 247 time has been read
Tags: Hyundai Samho Heavy Industries, Tanker.