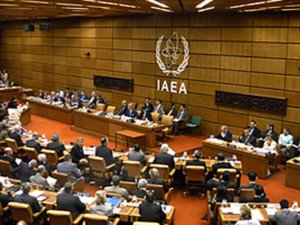 According to AFP, Cornel Feruta made the remarks in a meeting of the IAEA Board of Governors in Vienna today.

"These centrifuges are either installed or are being installed: Twenty two IR-4 centrifuges, one IR-5 centrifuge and thirty IR-6 centrifuges," according to the IAEA statement.

The IAEA Board of Governors kicked off a meeting a few minutes ago at the IAEA headquarters, and Feruta is slated to read a statement on the agency's agenda, including the status of monitoring Iran's nuclear program at a news conference.

Meanwhile a Wall Street Journal reporter Laurence Norman has announced the start of installing a next-generation of centrifuges in Iran.

"As mentioned earlier, Iran has now started preparing the ground for reinstallation if it’s IR-2Ms, the one more advanced type of centrifuge it has properly mastered. In addition, in a letter to the Agency dated 8 September, Iran informed the Agency that it would," Laurence Norman wrote in a tweet an hour ago.

As a third step in Iran's reduction of commitments under the deal, the Atomic Energy Organization of Iran (AEOI) said on Saturday it has activated 20 IR-4 and 20 IR-6 centrifuges for research and development purposes.

The third step comes after the Europeans failed to meet a 60-day deadline to meet Iran’s demands and fulfill their commitments under the deal, officially called the Joint Comprehensive Plan of Action (JCPOA).