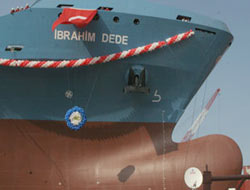 Ibrahim Dede, the biggest container constructed in Sedef Shipyard has been launched with a ceremony which Prime Minister Recep Tayyip Erdo?an has attended.

Ibrahim Dede, the biggest container constructed in Sedef Shipyard has been launched with a ceremony which Prime Minister Recep Tayyip Erdo?an has attended.

Speaking in the ceremony, Recep Tayyip Erdo?an talked about the enlargement in the shipping sector. According to Erdo?an bulk carrying by shipping is preferred one today in the world and this leads the increase of vessel demand. Erdo?an told that the incrase of demand and rebuilding older ships through the second hand market causes dynamism in the sector.

"While there is percent 100 increase in vessel ordering in the last three years in the world, there is percent 400 enlargement in Turkey. Also 142 vessels were produced between 1988-2002 years however with escalation in production 368 vessels were produced since 2003. So Turkey has been the fifth one in the sector after China, South Korea, Japan and Vietnam.The great increase in vessel ordering caused growing number of shipyard. While the number of shipyards were 37 in 2002, now it came up with 84 ones. Also the construction of 64 new shipyards are being continued" claimed Erdo?an.

The president of Turkish Shipbuilders Association Murat Bayrak talked for the anxiety about the falling export and employment rates after the news for Tuzla in the ceremony of launching ship named "?brahim Dede".

Metin Kalkavan, the president of Chamber of Shipping, critized the understanding which blames the whole sector as guilty just because of some failings and deficients in shipyards. "The number of ordering in the last six months has fallen to eight because of the incidents in shipyards and high interest. Tuzla, which was developed through 30 years, is being tired to vilified" said Kalkavan.

After speeches in the ceremony, "Ibrahim Dede" was launched.

This news is a total 3426 time has been read