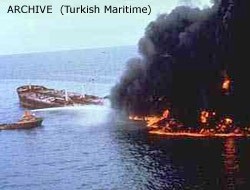 A raging fire aboard an Argentine navy icebreaker forced all 296 people aboard to abandon ship in the South Atlantic, where they spent hours in lifeboats awaiting rescue by an oil tanker and fishing vessels, the military said Wednesday.

A raging fire aboard an Argentine navy icebreaker forced all 296 people aboard to abandon ship in the South Atlantic, where they spent hours in lifeboats awaiting rescue by an oil tanker and fishing vessels, the military said Wednesday.

The fire broke out late Tuesday in the auxiliary generator compartment of the Almirante Irizar, and Capt. Guillermo Tarapow ordered all passengers and crew to abandon ship in 24 lifeboats when the flames became uncontrollable.

An oil tanker and two fishing vessels rushed to the area and, within hours, plucked people from most of the lifeboats drifting off the remote Patagonian city of Puerto Madryn, 930 miles south of Buenos Aires.
Winds helped spread the flames, and after battling the fire for about 90 minutes, the crew had to abandon ship, said Capt. Guillermo Palet, a naval spokesman.

"The captain took the very difficult decision of ordering those aboard to abandon ship," Palet told a news conference.

Survivors spent hours in lifeboats on the chilly waters before they were plucked to safety, he said. Most were rescued overnight, but some had to wait until after daybreak.

"It was a continuous operation from the start," said Palet, who had no initial reports of serious injuries, although doctors were being flown to Chubut as a precaution. "The information being provided by the three (rescue) ships is that there are no cases of hypothermia."

Authorities did not give a cause for the fire.

The Panamanian-flagged tanker Scarlet Ibis and an Uruguayan fishing vessel were the first to arrive in the area, located some 140 miles east of Puerto Madryn, the military said. Another fishing ship followed afterward.

On Wednesday, navy and air force planes overflew the stricken icebreaker and authorities said the coast guard ship Thompson and the navy ship Granville were speeding to the area.

The Almirante Irizar was built in Finland and acquired by the Argentine navy in 1978. Measuring 390 feet, it has played key roles in Argentina's annual supply runs to Antarctica in the warmer southern hemisphere summer that begins each December.

The ship had restocked more than a dozen Argentine bases and research stations, and was returning to Buenos Aires with armed forces personnel who had concluded stints in Antarctica when the fire broke out just after 10 p.m. Tuesday.

This news is a total 1024 time has been read