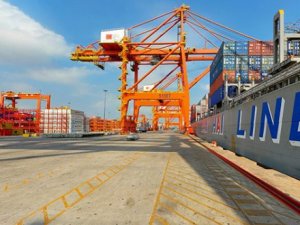 for the transport of the country’s prized produce.

Designed according to the needs of Ecuador’s export market – SIE, Ecuador’s first integral insurance for banana exporters was launched recently through efforts of CGSA-led Logistics Community of the Port of Guayaquil (Comunidad Logistica del Puerto de Guayaquil – CLPG). Supported by RSA Seguros as advisers and multi-national insurers CHUBB and Zurich, growers are ensured of a single global insurance coverage for banana exports – from container handling, transport, and third-party damages.

Being an indispensable tool for the commercialization of Ecuadorian bananas to international markets, insurance serves as a key step to support the growing needs of the industry, bananas being the country’s main export product after petroleum. More than 60 percent of production is exported to two main markets: the European Union and the United States of America. The country also supplies Russia and Asia.

Compared to traditional insurance, which only covers limited phases in the transportation of the fruit, the integral transport insurance enables banana growers to have peace of mind that their product is covered until delivery at the destination of their customers.

Jose Antonio Contreras, Contecon Guayaquil SA chief executive officer, said that the increased logistics collaboration between the port and different supply chain stakeholders in Guayaquil will ensure that the country stays on as the world’s largest exporter of bananas: “We wanted to leave behind the traditional role of the port that only receives and dispatches the cargo, Instead, we strategize and continuously search for new products/solutions for our customers.”

He adds: “We are positive that reducing risks for the export of goods will contribute to lower logistics costs, and should positively impact Ecuador’s economic and social development.”

Members of the CGSA-led Logistics Community of Guayaquil represents more than 83 percent of Ecuador’s non-oil exporters, with bananas comprising the largest volume.

Plans are underway to extend this type of integral insurance to the rest of Ecuador’s exporters.

ICTSI has invested more than USD325 million for its 20-year concession period to operate the Guayaquil Container and Multipurpose Terminals at the Port of Guayaquil, which will end in 2027.