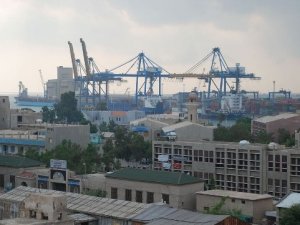 SPCT has a capacity of about one million TEU, and it handled about 470,000 TEU last year. It has 16 meters of depth alongside, and it is equipped with modern RTGs and STS cranes. It was built in 2011 as part of a modernization and expansion push for Port Sudan.

Port Sudan is the nation's main seaport, handling about 90 percent of Sudanese foreign trade. Sudan's Ministry of Transportation has been working on controversial privatization plans for the port since 2016, leading to protests from workers' groups. ICTSI competitor DP World was reportedly involved in early talks with the ministry, but did not ultimately secure the concession. The Sudan Democracy First Group, an advocacy organization, alleges that the Sudanese government dismissed more than 3,000 workers in early 2017 in the run-up to a privatization bid.

The International Transport Worker's Federation, which has mounted a global advocacy campaign focused on ICTSI's labor practices, charges that the firm has shown a willingness to work with regimes that are "either censured or under investigation, including for crimes against humanity." ITF cites ICTSI's past dealings with Syria, Sudan and the Democratic Republic of Congo. In a recent shareholder appeal, the union suggested that "oversight by an independent and empowered Board, with an active and thorough Board Risk Oversight Committee" would help steer ICTSI clear of future entanglements related to sanctions or human rights issues.

Sudan's president, Omar al-Bashir, was briefed on ICTSI's concession agreement last Thursday, according to Sudan's Sea Ports Corporation. al-Bashir is the subject of an outstanding arrest warrant from the International Criminal Court for ten war crimes charges, including three counts of genocide, for his alleged involvement in the ethnic cleansing campaign in Darfur in the mid-2000s. President al-Bashir denies the charges and has not faced trial.

In October 2017, the United States lifted sanctions on Sudan over its internal military operations and its interference with South Sudan. As a result, U.S. entities can generally do business with Sudanese individuals and companies.

This news is a total 628 time has been read
Tags: ICTSI Wins 20-Year Concession for Port Sudan Terminal