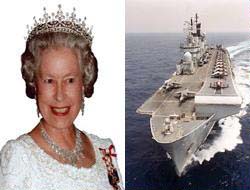 Queen Elizabeth II of the United Kingdom proceeded from Ankara to Istanbul on Thursday.

Queen Elizabeth II of the United Kingdom proceeded from Ankara to Istanbul on Thursday.

Queen Elizabeth II and her entourage will attend "Joint Science Project Between Schools" activities that would be held in Kabatas High School in Istanbul.

The Queen will visit "British-Turkish Design Exhibition" in Istanbul Modern after having a boat tour at the Istanbul Strait.

Queen Elizabeth II will host a reception in honor of Turkish President Gul and his wife at HMS Illustrious, an aircraft carrier of the British Royal Navy and will later return to Ankara.

The queen visits Bursa on second day of trip

The queen of the United Kingdom, currently on a four-day visit to Turkey with her husband, Prince Philip, yesterday visited the historic northwestern city of Bursa, once an Ottoman capital and now home to Turkey's automotive and textile industries.

The queen was met in Bursa by Mayor Hikmet ?ahin and Bursa Chamber of Commerce and Industry Chairman Celal Sönmez and his spouse. Two children presented the queen with flowers upon her arrival, while a folklore dance group and a Janissary band performed.

Queen Elizabeth II started her Bursa trip at Koza Han, or the "silk cocoon market," an ancient caravanserai built in 1491, where she was given a silk scarf adorned with the seal of an Ottoman sultan.

Later, Queen Elizabeth and Prince Philip visited a local vocational high school for girls, where they watched artist Nuray Y?ld?z work on a piece of marbled artwork --- ebru in Turkish -- as institute officials informed the queen on the history of ebru.

Bursa Hakimiyet, a local newspaper, used an English headline, "Welcome to Bursa Your Majesty," in yesterday's issue. "We are honored by your visit. We hope to host you in the best way possible," the newspaper wrote. The front page of the paper was printed in both English and Turkish.

After the visit to Koza Han, the queen attended a traditional Ottoman shadow puppet show and a fashion show and visited the Great Mosque where she listened to a recitation of the Quran. 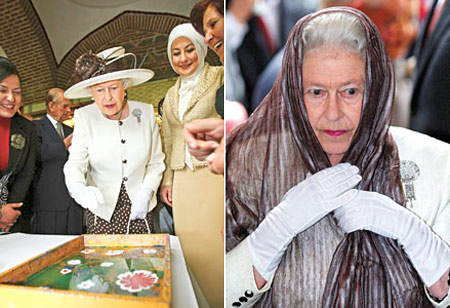 Turkey a bridge between East and West

Queen Elizabeth on Tuesday praised Turkey, positioning it between the West and the Islamic world. "For us, Turkey is as important now as it has ever been," Queen Elizabeth II said in a state banquet held in honor of her visit, her second in 37 years. "Turkey is uniquely positioned as a bridge between East and West at a crucial time for the European Union and the world in general."

Wearing a tiara and dressed in a white gown embroidered with beads in the form of grape bunches, Queen Elizabeth said, "You are playing a key role in promoting peace, political stability and economic development in some of the world's most unsettled areas," a reference to the Alliance of Civilizations initiative.

Turkey, which is vying for EU membership, is -- along with Spain -- a co-sponsor of the UN-backed project aiming to increase dialogue between Western and non-Western cultures and to address the causes of conflict between them.

In a gesture of respect, President Abdullah Gül wore a tuxedo and a silver-colored bow tie to the 300-guest banquet.

Gül thanked Britain for backing Turkey's EU bid. "The United Kingdom has become one of the most loyal supporters in Turkey's march toward membership in the European Union," he said. "We are grateful for this unwavering and permanent support."

Earlier, the queen visited the mausoleum of the founder of modern Turkey, Mustafa Kemal Atatürk, and laid a wreath at the tomb, a tradition expected of all visiting dignitaries.

"It is an honor to pay my respects to Mustafa Kemal Atatürk, a much beloved friend of the United Kingdom and one of the great figures of modern history," she wrote in the visitor's book at the mausoleum.

At the monument, the queen was presented with an album of photographs of her uncle, King Edward VII's visit to Turkey in 1936 as well as her last visit, in 1971.

During their stay the queen and her husband will see some of Turkey's most revered national monuments and take part in religious and cultural traditions, highlighting her country's good relations with Turkey. 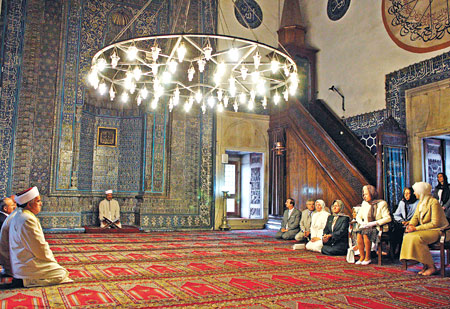 Meanwhile, an interesting detail came out during a conversation between the queen and President Gül when they met at the presidential palace yesterday. According to sources close to the presidency, Gül recounted a memory from his youth, recalling that when the queen had visited Turkey the first time in October 1971, he had waved to the queen in ?stanbul's Çemberlita? area. Gül was at the time a 21-year-old student in the department of economics of ?stanbul University. "I was a university student -- one among the many -- waving at you when you visited Çemberlita?. Such is fate that I am now receiving you as president."