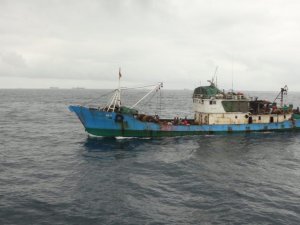 There are legitimate reasons to carry multiple flags, but Maritime Affairs and Fisheries Minister Susi Pudjiastuti said that the vessel was suspected of changing out its own flag in order to evade fishing regulators.

The vessel's holds allegedly contained hundreds of protected tiger sharks. It is currently under arrest at Kupang in Timor, East Nusa Tenggara; more boats bearing the Fu Yuan Yu name have also been detained by Timorese authorities and are being processed jointly with Indonesian investigators. (Other ships bearing this name have previously been implicated in illegal driftnet fishing.)

Indonesia has seized nearly 130 illegal fishing boats this year and has sunk almost all of them, part of a long-running campaign to deter illegal fishing. As fisheries minister, Pudjiastuti gained fame (and widespread popular support) by ordering that confiscated vessels should be blown up or burnt, a practice that has since been phased out in favor of sinking.

Pudjiastuti's ministry recently entered into a partnership with Global Fishing Watch to make the nation's Vessel Monitoring System (VMS) data publicly available on the NGO's worldwide activity map. The arrangement will provide journalists, researchers and the general public with information on the movements of about 5,000 smaller fishing vessels that lack AIS, in addition to thousands more that are already tracked in Global Fishing Watch's database.

This news is a total 3111 time has been read
Tags: Illegal Fishing Boat Tries to Fly Six Flags